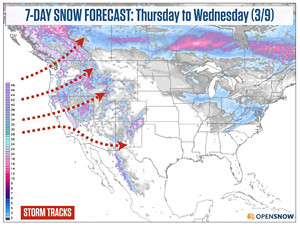 It’s time to buckle up for a ride on the Powder Train!

In California, and especially the Lake Tahoe region, snowfall will be measured through mid-March with yardsticks. Forecasters are calling for a freight train of moisture to barrel into the West Coast beginning this weekend, dropping huge amounts of rain along the coast and heavy snow in the mountains.

Following a warm, dry February in California, a shift in the weather pattern will open the door for several storms to soak the state during the second week of March. Forecasters are even saying that enough rain may fall to put a noticeable dent in the drought across the Golden state.

But Tahoe won't be the only winner, according to OpenSnow.com. Big snowfall totals across the West Coast right up into Washington and British Columbia are on tap.

“The somewhat warmer Pacific air will push snow levels up to around 5,000 feet or higher in the Pacific Northwest, so make sure to target the highest elevations when you are chasing powder,” noted OpenSnow.com meteorologist Joel Gratz in his latest blog.

While the brunt from the latest round of upcoming storms will slam California, Oregon and Washington, portions of the Rockies will also see a return to snowier conditions after a few weeks of warmth and sunshine.

“While the forecast for the next seven days is not as favorable for Utah, Colorado, and the interior Rockies, I do think these areas will see decent to good snowfall as we head into mid March and beyond,” Gratz noted.

Meanwhile, from the Midwest through the mid-Atlantic and Northeast regions, a taste of spring will warm things up significantly toward the middle of March. Beyond a couple storms brushing the mid-Atlantic and Southern New England this weekend, much warmer conditions will move in next week. The pattern change could signal an end to wintry weather this season for many locations.

No significant snowfall is expected throughout the regions through mid-March, and temperatures will climb into the mid-to-upper 50s next week. So break out the suntan lotion and get to work on those goggle tans.

Check out the regional forecasts before you head out this weekend. And don’t forget to check the latest snow conditions too.