Pow Wow In Pines Music Festival, Life's A Beach Party On Tap In Michigan’s UP 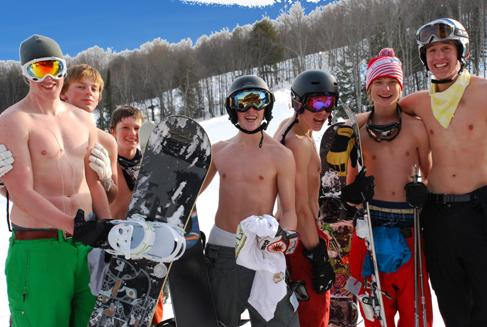 March, with longer, warmer days, is often one of the best months to head to Michigan’s UP for some skiing and riding. More good reasons: Indianhead Mountain is hosting its annual spring music festival and Ski Brule plans a beach party.

Indianhead’s Pow Wow in the Pines Music Festival is March 20-21. The two-day music festival will feature 20 of the region’s best bands, some all the way from the Twin Cities.

Bands will play throughout the day with no cover charge, and tickets for the Friday and Saturday night concerts are $20 for one night and $35 for two nights. Bands include Horseshoes & Hand Grenades, Carrie Nation & The Speakeasy, The Ditchrunners, Dead Horses, The Last Revel, Tin Can Gin, The Dead Pigeons, Black River Revue, Them Coulee Boys, and The Slamming Doors, to name just a few. Indianhead's annual Slush Cup, a great spectator event is March 28.

Don’t forget you now get to ski both Indianahead and Blackjack, located just across the valley, on the same lift ticket. Lodging packages start from $80 per night for hotel rooms. One bedroom condos start from around $200 per night and two bedrooms from $253 per night through March.

Brule is offering a Spring Break Lift & Lodging Special, March 23-April 5, $25 off per person, per night. During the week activities for all ages include marshmallow roasts, the resorts famous Homestead BBQ, tubing, sleigh rides, whitewater tubing, Nastar and night skiing Wednesday, Friday and Saturday from 4:30-8 p.m.

Life’s A Mountain Beach Party is March 28-29 with lots of family activities planned including potato sack races, a water balloon toss and photo shoot Saturday, and a limbo contest on skis and three legged race Sunday. Face painting will offered all weekend. Easter Weekend, April 5-6. Join in on the search for the Golden Egg hidden somewhere on the mountain and win a 2015/16 season pass. Eggs also take a prominent place in slope activities that weekend. The egg and spoon race takes place on Saturday and the infamous egg toss happens on Sunday followed by Brule’s tasty Easter brunch.

There’s plenty to celebrate and winter isn’t over yet in the UP. Brule normally stays open well into April and a couple of times even skied into early May.

Photos: Top -- It's a beach party at Ski Brule (Ski Brule); Bottom -- It's the annual bikini race at Indianhead (Indianhead) 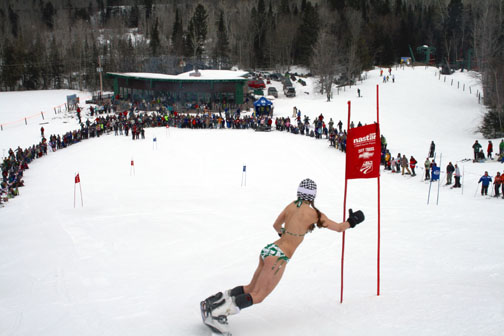