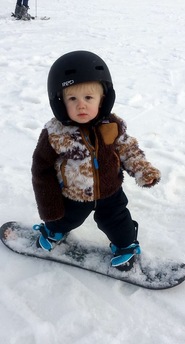 Jackie Engvaldsen, a Head Start pre-school teacher from Beach Lake, Pa., has won the First Day Faces photo contest organized through the Learn to Ski and Snowboard (Month)/Bring a Friend initiative. Jackie submitted her photo “Never Too Young” of her daughter Ashlyn who is 16 months old in the winning photo.

Jackie took the photo at Pennsylvania’s Big Bear where she serves as an instructor for smaller children. She and her husband ski and snowboard. Their 3 year-old, son also is a skier. Jackie’s parents and her husband’s parents all are skiers.

“I would encourage everyone to learn to ski or snowboard,” she said. “It is a lifelong sport that can be shared through multiple generations. My children love skiing with their grandparents and their cousins. We wanted our children to learn to ski early in life because it is something they can enjoy now and also for the rest of their lives”.

Jackie won the Grand Prize in the contest – a four-day trip for two to Utah including airfare from any major city. The trip is for the 2015-16 season. 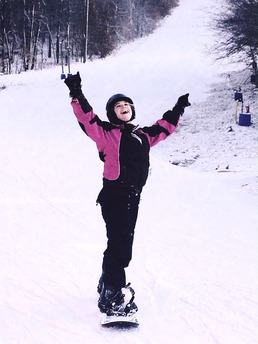 The second place finisher was Lily Boyce, who took her first lesson at Jack Frost (Pa). Lily works for a Washington, DC non-profit organization that deals with Food and Water issues. She went to Jack Frost on a New Year’s Eve trip and has signed up for additional lessons at Maryland’s Wisp Resort since then. She entitled her entry “Victory” because she was able to negotiate a BLUE run soon after learning. Lily won a two-day Getaway to Liberty Mountain Resort (PA) and a snowboard from Burton.

“We wanted ‘First Day Faces’ to show the breadth of people who start skiing or snowboarding and our entries cam from all over the country,” said Mary Jo Tarallo, director for the Learn to Ski and Snowboard (Month)/Bring a Friend initiative. “It was fun working with PSIA-AASI and the creative agency Cultivator on First Day Faces and even more fun to see how many parents sent in photos of their children who are newbies. We are grateful to our partners for providing well-earned prizes for the winners, many of whom we feel are the future of snow sports.” 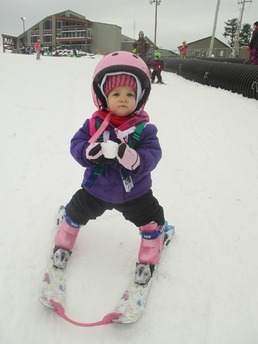 Sarah Steffen-Hosch sent a photo of her son that became a hit on Facebook. She won a snowboard from Ride for her photo of Sebastien who started snowboarding at a very young age on the slopes of Sundown Mountain in Iowa. Sarah and her husband both are snowboarders.

Other winners included Jake Bogdon (Nev.) who won a pair of skis from HEAD SKI, a major supporter for Learn to Ski and Snowboard (Month)/Bring a Friend. Stacie Cerretti (IA) won a $500 gift voucher from Krimson Klover and Justin Robey (Vt.) won a gift voucher and signed Glen Plake poster from Screamer along with a hat from Turtle Fur and socks from Falke. Justin is a lift operator at Stratton (Vt.).

Photos: Top -- This photo of daughter Ashley won mom first place; Lily Boyce won second place for her "Victory" photo after negotiating a blue run; Sarah Steffen-Hosch's photo of her son got lots of play on Facebook (Learn to Ski and Snowboard/Bring A Friend)