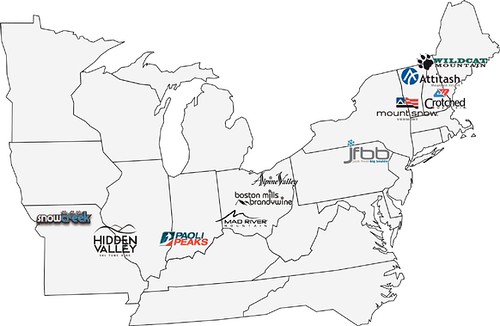 Peak Resorts has filed with the U.S. Securities and Exchange Commission (SEC) for an initial public offering of its common stock that could raise $100 million. The number of shares to be offered and the price range for the offering have not yet been determined. If approved, stock will be listed on the NASDAQ Global Market ("NASDAQ") under the symbol "SKIS".

Peak Resorts, valued at $105.2 million, operates 13 resorts in the Northeast and Midwest, 12 of which it owns. Holding include Mount Snow, Vt., Wildcat, N.H., and Attitash, N.H.

The company originally filed terms for an $85 million IPO in November 2011 with a $152 million market value but postponed its offering.

The majority of resorts are located within 100 miles of major metropolitan markets, including New York City, Boston, Philadelphia, Cleveland and St. Louis, enabling day and overnight drive accessibility. Combined, the resorts generated approximately 1.8 million visits in the 2013/2014 ski season, an increase of 4% from the prior ski season.

In the prospectus filled with the SEC, Peak Resorts states it will use the net proceeds from this offering to repay debt and use the remaining proceeds for working capital and general corporate purposes.

Since 2008, the prospectus states, Peak Resorts has invested $49.7 million in energy-efficient snowmaking machinery, high-speed/high-capacity lifts and additional features such as terrain parks and various other infrastructure investments.

“The costs of these improvements are significantly outweighed by the benefits realized, which include higher quality and less costly snow, shorter lift lines, terrain expansion, and customer appreciation. We have found that the ability to transport customers up the mountain on high-speed chairlifts and to reduce lift lines not only attracts skiers and promotes a better skiing experience but also leads to higher restaurant and retail sales and increased customer satisfaction.”

Revenue generated from Mount Snow in fiscal 2014 represented approximately 40 percent of the company’s total fiscal 2014 revenues. Development at Mount Snow is a significant element of their growth strategy. Peak Resorts intends to finance the Carinthia Ski Lodge Project and the West Lake Project with funds raised under the U.S. government's Immigrant Investor Program, commonly known as the EB-5 program. The West Lake Project includes the construction of a new water storage reservoir for snowmaking with capacity of up to 120 million gallons.