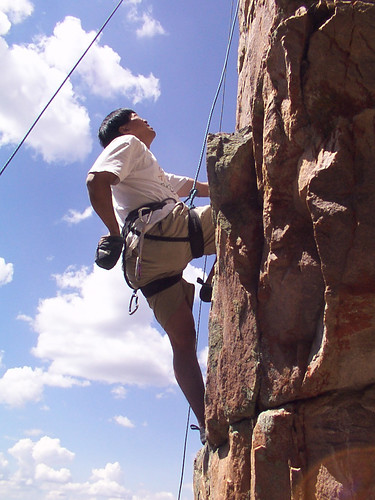 You can still roast in September in Salt Lake City. Temps have cooled off significantly thanks to the recent rains which leaves you with two reasons to head to the Uintas before it snows: Cool exposed climbing and vibrant fall colors.

The heat of a Utah summer can often linger into October. You can barricade yourself inside, chilling like a lizard in Moab with your A/C cranked or you can hightail it to the Uinta National Forest for hiking, biking, camping and rock climbing among the brilliant reds, yellows, greens of the season.

It was a little past 10 a.m. when we headed northeast through Kamas to Ruth Lake. Mirror Lake Highway had long since thawed and we watched the car’s thermometer tick off the degrees in time with the reception bars on our cellphones. Relief was near. From heat, from life, from civilization. In just about an hour from Park City, we would be hiking the wilderness and approaches to some of the best climbing routes in the Wasatch and we wouldn’t be able to Tweet about it.

Though the secret of Uinta rock climbing was outed in the early 2000s, with some of the state’s top climbers erecting routes and writing maps for the quartzite and conglomerate walls, it has never been able to eclipse the popular Cottonwood, American Fork and Maple canyons where the stuff of rockstars are formed. But that’s ok. It just means that on any given day from June to October we’re not standing in line waiting for a route or forced to go elsewhere because of crowding.

It’s a 20-minute hike to the crag from the pullout; enough to summon a sweat but it pays to wear long layers and close-toed shoes from the car to the rock as the fall weather can change from sun to storm before your gum loses flavor.

We chose Ruth Lake because it’s in the shade all day. But on cooler days the south facing Stone Garden is a better choice for climbing from sunrise to 8 p.m. There are at least 20 developed climbing areas that both sport and traditional climbers linger over. You could spend the entire summer exploring the forest and it wouldn’t put a dent in the list of routes rated from 5.6 to 5.12.

Uinta Rock by Nathan Smith and Paul Tusting was published in 2004 and still stands as the only area-specific climbing guide for the Uintas. However, the number of routes has doubled since then. If you’re “connected” in the climbing world you can probably get your hands on a homemade topo map with the new routes marked, or simply ask around for insiders’ tips.

White Pine Touring and Utah Mountain Guides run regular excursions to the area so their people are a valuable resource.

Expert climbers looking for killer problems at 5.13 and above might be bored in the Uintas unless they’re making first ascents but the majority of us take immense pleasure in a 5.9-5.10 bolted sport route. Other good developments for beginners and intermediates are Fehr Lake, Notch Lake and Moosehorn.

I’ve heard the routes in the Uintas called “spicy”. In other words, they are interesting, fun and challenging. I guess you could say, then, that Ruth Lake has six separate walls of various ‘heat’. 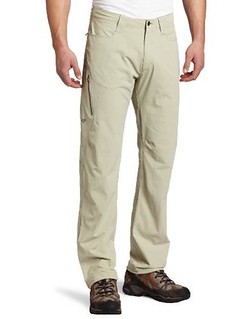 There’s no denying the breathtaking panoramas made even more impressive surrounded by fall’s blanket. From over 10,000 feet elevation you can see a vast expanse of pristine mountain lakes, wild flowers, and snow-capped peaks. Plus, unlike climbs in Big and Little, Uinta National Forest isn’t watershed. You can bring your well-behaved dog(s).

My first thought as we hiked the path to Ruth Lake from the parking lot was how I wouldn’t want to be anywhere else on earth. I was with friends, cool, on an adventure, about to get the best upper body workout a girl could want and there was an award-winning berry shake waiting for me at Hi-Mountain when it was all over. The perfect solution to a fading summer in Utah.

When you spend your day 40+ miles away from the closest 7-11 with no cell reception, it pays to pack right. Of course you’ll need the standards like sunscreen, water, lunch and a first-aid kit but for climbing in the Uintas you might want these other essentials.

You’ll want to wear Outdoor Research Ferrosi Pants on and off the crag. Made of a lightweight, rugged, wind and water-resistant, breathable soft-shell fabric, they stretch as you move and protect and flatter your legs as you shimmy and scramble. Developed for climbers by professional climbers. $75.

Photos: Top: Fall is the perfect time to climb in the Uintas (Jill Adler); Bottom right -- Outdoor Research Ferrosi Pants are great for fall hikes in the Uintas.