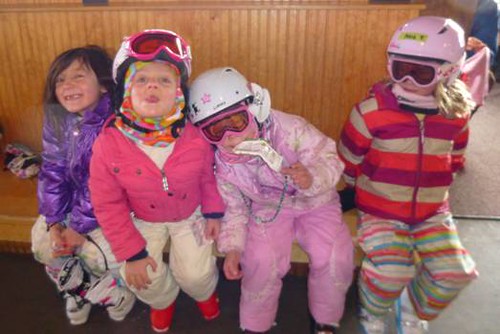 It doesn’t matter what the medical journals say, the cold and flu season begins the day kids start ski school.

Those little rugrats may be cute in their pink-flowered Obermeyer ski suit but they’re like one big floating virus spreading germs throughout ski resorts via their own contact with humans, mommy and daddy, their teachers, their playdates. We can no more get junior to wash his hands or blow his nose on his own than we can stop ourselves from skiing on a powder day.

Now, I’m not blaming kids per se for cold and flu viruses run amuck, but it’s got to start somewhere, doesn’t it? It’s best to blame the little people because they can’t argue with you. After all, they’re the ones hoarding the flu vaccine while we active recreators suffer.

So now that we’ve got blame placed, will that keep us healthier this winter? Hell, no. Regardless of where it came from, it’s out there, like a secret revealed, illness spreads without conscience.

Apparently it’s “normal” to catch four to six colds a year, but anyone who has ever tried to ski hard with a perpetual stream of mucus dripping from their nose and down their throat knows that even one cold could mean missing the biggest dump of the season. But how do you stay well in the white room?

If you stand in an enclosed space with 20 sniffling kiddies, will sickness naturally follow?  Chances are high that you would get the virus but you might not get “sick.”

Just because everyone else is sick doesn’t mean you will be,” said Dr. Michael Cerami of Utah Sports and Wellness. “Healthy bodies deal with infections without producing symptoms.” Some people just have better immune systems, capable of fending off foes. Therefore, having a healthy winter doesn’t depend so much on who you’re near but how well you are.

You can deal with immunity on two levels: preventative and reactive. Reactive involves drugs, bedrest and Kleenex. Preventative involves fortifying your immune system; that’s everything from washing your hands after every handshake to eating right, imbibing less, exercising, calming stress (to body and mind), and tossing the smokes. In other words, eat right, exercise, and get plenty of rest. Duh.

Eating right involves getting the right balance of vitamins and minerals for your system. This balance is very subjective so visit a nutritionist for specifics. What we know will make a difference is spicing up your life. Spices like coriander, ginger, black pepper, and cinnamon help raise your immunity and digestion.

Allegedly, the oils in ginger and cinnamon cleanse your system and banish viral and bacterial infections. As for homeopathic remedies, Echinacea is said to increase T-cell activity and raise properdin levels to help neutralize viruses. Goldenseal sends more blood to the spleen to get it working more efficiently to release immune-enhancing compounds. Astragalus taken regularly also boosts your resistance to colds, flu and other viruses.

Some people groove on more holistic approaches to keep them healthy and although the benefits are largely uncharted, think about your options: sit around to see if you get sick or do everything you can think of to keep on riding. Acupuncture reportedly reduces fevers and boosts your immune system by strengthening your underlying weakness.

There’s actually a "miracle" point for the common cold at the base of thumb. You find it by drawing an imaginary line down the middle of the index finger. If a cold is coming, this spot will be sore to the touch. Your sore throat can be eliminated or lessened with attention to the space between the ring finger and middle finger knuckles.

Yoga, Chiropractics and massage are powerful tools for balancing your immune system. Through relaxation, the nervous system can tell the immune system to fight the viruses and bacteria that multiply in winter. Immune systems, weakened from energy imbalances or poor digestion, allow bacteria to infect the upper respiratory system.

That stuffy head cold could easily morph into bronchitis or pneumonia. Certain yoga postures like the Child’s and Cobra pose open the chest and slow the breathing, to let go and relax the nervous system.

Chiropractic medicine also helps by relieving stress on the nervous system, which in turn relieves the immune system. The brain and nerve system assembles and transmits information to the rest of the body to make it operate. When the pathways are blocked, pertinent information - like telling the body how to heal and prevent illness can’t be properly channeled.

Cerami relieves stress on the nervous system with light force that allows the body to work in tune with the immune system to keep it balanced and healthy. As for massage, craniosacral bodywork also uses light force and pressure to strengthen the body's ability to challenge sickness, stress and pain.

It makes sense that when your body and spirit are low, you’re more likely to get sick. But there are some basic, free preventive measures everyone can take to make it through cold and flu season without using your sick days for anything other than a day off to ski:

Get plenty of regular sleep to allow your body's immune system to motivate.

Limit alcohol intake – not only does it dehydrate but you lack the restraint required to avoid the hotty with a terrible cold.

Finally, listen to your body. If you feel less than tiptop, rest. The first thing to go when you’re tired or stressed is your immune system.