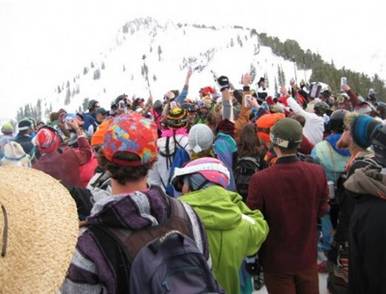 It's official. The season - at least in Utah - is going down as the warmest and driest on record. According to the National Weather Service, temps were consistently 7 to 13 degrees above normal from December to March; and that news comes on top of the reports that our nation’s winter overall was the 19th-warmest in the last 120 years.

The irony is that NOAA was calling this back in October, yet everyone seems surprised. But despite the disappointing news, Utah skiers are still ready to party.

The massive party you’ll share with a couple hundred of your fellow passholders takes place atop Alta’s High Rustler on the final Sunday of the season. It celebrates the "Final Closing Day of Alta." (Alta closes on April 19 then reopens for one last weekend on April 24, 2015)

Locals skiers aren't ones to let their favorite resorts close without a bang so the annual ritual of meeting on High Boy for the last run of the season has been raging since the 1960s.

That’s when a loyal group of “Altaholics” made the High Traverse to Rustler for one farewell kiss to winter and some raucous hell raising.

The 45-degree pitch drops you quickly into the 1,300 vertical-foot run, but the point of the ceremony is to wait, and wait, drawing out the day until the last possible moment before making that painfully sweet final run. 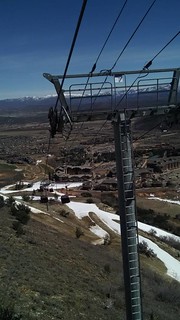 Back then, the gang waited until the last Germania chair emptied and those skiers joined up with them. That was around 6 p.m. or so. Now, you might still catch skiers crunching beer cans from the peak at 7:30 p.m. as others make their way to the parking lot.

Alta technically closes at 4:30 p.m. but the sign at the top of Collins Lift will post that ski patrol's going home at 5 p.m., you're on your own, so be careful. That's like leaving for the weekend and giving the teenagers the keys to the house, the car and liquor cabinet. Who'd want to leave that party?

More than 200 skiers and snowboarders (who brave the cat track from Snowbird's Baldy Express to the top of Collins and the High T) dress in crazy costumes and rally for the ridge above Rustler.

Coolers, amps, boomboxes, beer, combustibles, fifths of whiskey and vodka, and firecrackers get passed among the crowd.

A flat spot no bigger than the bed of a pickup truck acts as the podium for the "judges." If you jump into Rustler too soon, these gatekeepers pound you with harsh words and harsher snowballs.

So you wait, and wait; hoping for a sign that it’s time to start the mass exodus from the peak. But it never comes too soon. Everyone has too much fun at the party to want to go home.

In past seasons, a giant roar would erupt from the mob and you'd experience a Chinese Downhill, Alta style. Flash turns, hoots, hollers, wipeouts, and apologies made to the wind as skiers continued their nonstop crush to the bottom, rippers barely missing the snowplowing novices who dared the ritual.

It wasn't pretty for anyone as you spent most of the run trying to survive the onslaught of darting, out-of-control bodies. But that was the best part.

These days the core riders may want to hang onto even the tiniest bit winter. We’ll see what happens this month on April 26.

You may have to decide on your own when to leave. Luckily the party continues with live music and the largest ski tailgating event of the season in the Collins parking lot.

If you’re anxious for asphalt make sure you sneak through a line in the trees and pop out below where the snowballs can’t reach you. The heavy wet snow is destined to leave a mark both physically and emotionally.