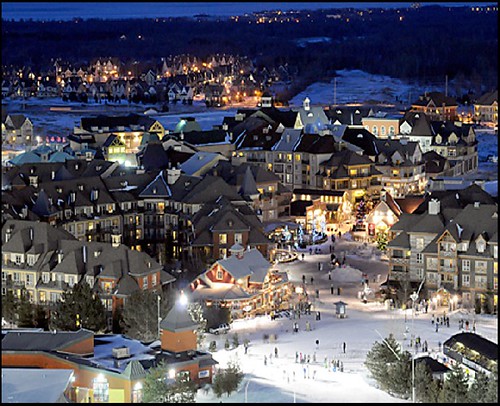 Blue Mountain Resort, located 90 miles north of Toronto, has a large 720-foot vertical, 42 trails ranging from beginner to double black diamond, two terrain parks, and 15 lifts, including five high-speed express chairs, the Ridge Runner Alpine Coaster, and a nice pedestrian village. Intrawest, which operates Winter Park and Steamboat resorts in Colorado, recently completed purchasing the Canadian resort, which they had owned half of for a number of years.

They completed an expansion last winter that added six trails and a fifth high-speed lift, which represented a $10 million investment. It added 64-acres of terrain into an old orchard adjacent to the ski resort providing a diverse selection of trails for all levels. It includes one of the longest beginner trails, 1.3 miles, found around the Great Lakes.

Good news for long time patrons, the popular Pottery Restaurant, after undergoing major renovations, reopened this summer and will be ready to greet guests this winter boasting a brighter more contemporary look. It will have an updated menu, but still include old favorites such as the Pottery’s signature chicken, shrimp and peanut pad Thai.

Save with the $89 Double Down, available until Dec. 18. It gives you two fully transferable day/night lift tickets valid anytime during the 2014/15 season, which is a savings of $59 off the cost two regular priced tickets. Limit of two Double Down cards per customer.