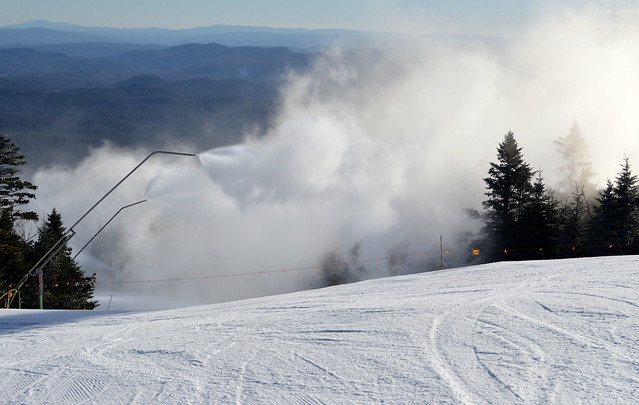 Owners Tim and Diane Meuller have been at Okemo since 1982. “Even in year one, when we didn't get a storm until January, we still had six trails open when other mountains had one or two,” Diane Mueller told SnoCountry.com.

The resort’s director of mountain operations, Eb Kinney, added, “One of the biggest things we've done at Okemo is being ready, so when the temp does come in, we're ready to go. Not just on one trail, but six.”

Ray Kennedy, the resort’s snowmaking manager, told us that they monitor weather data at ten different locations across the mountain. “We’re taking advantage of three- to four-hour windows” of snowmaking temperatures. “We take advantage of every opportunity.”

“If those guns can make snow,we're at it,” Kinney said. Once the weather does cooperate, it takes about ten days to cover the entire mountain. Ninety-eight percent of Okemo’s 667 acres have snowmaking.

In addition to 1,125 state-of-the-art, energy efficient HKD tower guns, Okemo utilizes hundreds of snowmaking guns of varying types. It is the HKD SV series of guns that allows them to open more terrain early in the season and recover more rapidly from unfavorable weather situations throughout the season.

“If Mother Nature is going to throw a curveball at us, Okemo is the place to be,” resort marketing director Dave Kulis told us.

Okemo has expanded its snowmaking system for a third year in a row with the introduction of two snowmaking trails: White Lightning and Rolling Thunder at Jackson Gore.

Okemo is also making accessing that snow easier this year. With the Okemo Real.Easy Card skiers can glide through special gates equipped with RFID readers that scan radio-frequency-identification-enabled cards you keep in your pocket. This technology makes the cumbersome visual checking of lift tickets and season passes a thing of the past. After an initial visit to the ticket window to purchase a Real.Easy Card, skiers and riders can go direct-to-lift on subsequent visits after loading new products onto the card online.

Photos: Top --While the valley may be lacking snow, the Okemo summit is nice and white.(Okemo/Facebook)