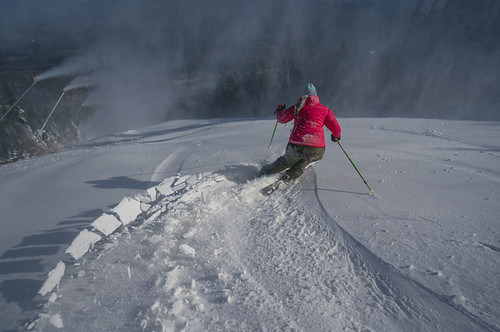 Sunday River and Killington will have to share first in the Northeast for opening day for the 2014-2015 season. Although coastal Maine received over nine inches of snow over the weekend, it was cold temperatures and advanced snowmaking technology that made this early-November opening possible. Sunday River plans to re-open for next weekend. Vermont's Killington opened Monday (Nov. 3) for passholders and opens to the public Tuesday Nov. 4. Killington officials said they plan to remain open for the season.

“We looked at the forecast and saw that we’d get a nice cold snap this last weekend, so the minute we could fire up the guns we did,” Sunday River’s Sarah Devlin told SnoCountry.com.

Sunday River did receive a few natural flakes, “but really our snowmaking is the advantage for our skiers and riders,” Devlin said. “We make our own winter.” Sunday River's team made snow on T2, Upper Sunday Punch, Cascades, Ecstasy, Jim's Whim, and Jungle Road Saturday night into Monday morning.

Killington's mountain operations team kept its focus on winter since the last chair in May, and has made significant improvements for the season with upgrades to snowmaking, lifts, signage and the trails themselves.

As Sunday River continues to gear up, that resort has used part of its $5 million capital investment package from parent company Boyne Resorts and an Efficiency Maine grant to procure 172 new, energy-efficient snowguns this season.The latest additions to the arsenal include 117 HKD Impulse Tower Guns, 50 HKD Method Park Guns, and five Snow Logic Tower Guns. The resort owns and operates a total of 1,900 snowguns, which allow it to cover 95 percent of its 135 trails.

“Thanks to our advanced equipment, we’ve always been able to make snow in marginal upper 20s temperatures. This weekend we had ideal temperatures in the upper teens,” Devlin said.

Snowmakers are also hard at work preparing for as of yet to be determined openings at Sugarloaf, Bretton Woods, Loon and Sugarbush.