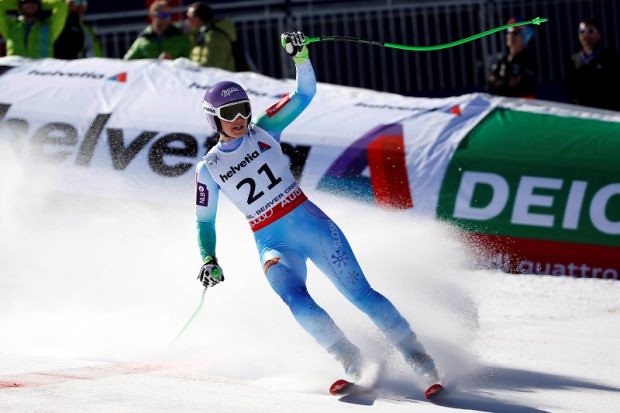 The much ballyhooed and anticipated women's downhill at the FIS Alpine World Championships at Beaver Creek, Colo. is now being bally-hooed in Slovenia where Tina Maze, it's own superstar, won gold in a time of one minute, 45.89.

Vonn was the next skier after Maze to come down the course and on the upper half, it looked like the American would have a fairy tale finish, but key mistakes mid-course cost Vonn nearly a second. She managed to make up some of the lost time on the lower part, but ultimately it was too big of a gap and she finished in fifth, clearly disappointing the hometown crowd -- the largest so far -- that packed the finish stadium.

“I’m disappointed with today, but at the same time skied as well as I could have," Vonn said. I was determined, I was focused and I wanted to ski my best for my friends, my family and all the fans here, but today was just not my day.”

Maze, 31, who hinted prior to the season about retiring after this year, is one of only three women to win World Cup races in all five disciplines. She has 22 world cup trophies and is the reigning Olympic champ in downhill and Giant Slalom.

The Slovenian star had a near flawless run the entire way down the Raptor course. She lost a bit of time at the bottom of course creating as nail-biting finish as she edged Fenninger (AUT) by a mere 0.02 seconds.

Fenninger and Maze switched spots this time. Fenninger won Tueday's super-G and Maze was queen for this day on the downhill.

"It’s a nice battle between Anna and I, it makes it fun for us,” Maze said. “The course, even though it was warm was perfect, the snow was hard and it made it really nice to ski here today.”

Maze, because of her prowess in all disciplines, has a shot as these championships roll along at breaking a record held by Norway's Lasse Kjus of five medals at the same event. Kjus, ironically, set his record during the 1999 World Championships at Beaver Creek.

Other American finishers in the downhill were Julia Mancuso, 16th; Laurenne Ross, 17; and Stacey Cook, 19th.

Vonn has a few shots left at gold with the combined (downhill and slalom) on tap next week and possibly the giant slalom, but this was the big day and it was not to be. She hasn't trained in slalom in several years.

Next up: The men's downhill Saturday on the Birds of Prey course.