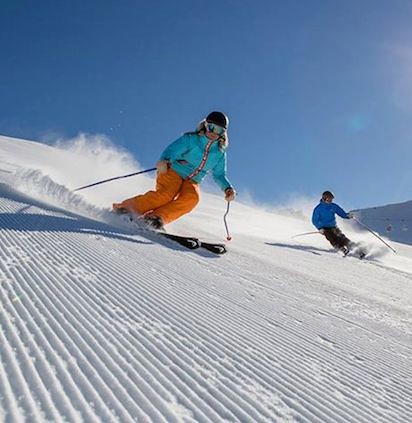 The winter action is just about to begin begin in New Zealand. Earliest opening is June 7 at Mt. Hutt. Others open mid-late June. Here is a preview of what’s new:

Queenstown’s The Remarkables is installing a high-speed chair as part of a number of improvements at the mountain. The Curvey Basin chairlift will carry a total of 63 six-seater chairs allowing up to 2,400 passengers per hour.

Other improvements include road re-alignment, sealing of the lower access road, trail developments, expansion of the snowmaking system, and extended car parking. The area opens June 21.

Coronet Peak in Queenstown has installed 80 new lights on the mountain, which adds 4km (about 2.5 miles) of lighted trails, doubling the accessible terrain on Friday and Saturday nights.  A new “Park after Dark” freestyle run with boxes, rails and a giant airbag caters to those skiers and riders who like to test their skills in the terrain park. It is scheduled to open June 20.

A new intermediate freestyle ski and snowboard terrain park will be waiting for guests at Cardrona Alpine Resort this year. This is their fourth park and will include a ‘triple jump line’, some additional rails and boxes. Action gets underway June 20.

Mt Hutt in Canterbury near Christchurch is re-instating a new-look Triple Chair. The triple chair was not in use last winter because the bottom station was damaged by an avalanche. There also will be a new terrain park farther up the mountain and trail improvements. Mt Hutt is scheduled to open June 7.