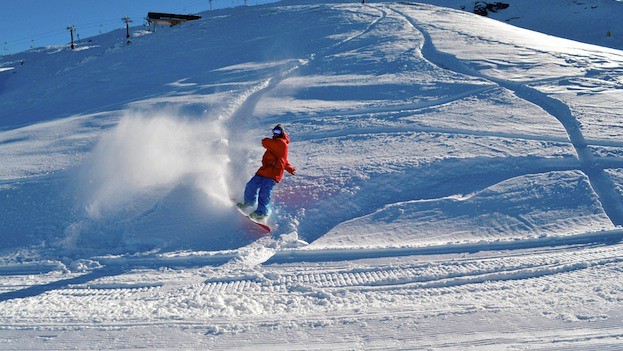 Current snowfall, forecast amounts, and snowmaking make for a good start to the season just getting underway in New Zealand.

The Remarkables is a 45- minute drive from Queenstown. The high-speed, 6-seater detachable Curvey Basin Chair to the top of the mountain makes its debut this season, opening up new trails and views, and transporting up to 2,400 people an hour. Trails scheduled to open early include the new Curvey Trail, Alta Green, Gotham City, and the learner’s area.

Coronet Peak, the closest area to Queenstown, claims to have New Zealand’s longest opening hours and weekend skiing. Upper mountain depths are 30cm with the lower mountain at 20cm (8 inches).

New this year at Coronet Peak is a kids Fun Zone featuring berms, boxes, rollers, and a tunnel. Night skiers and boarders will find the addition of 110 lights giving them an additional 4km (2.5 miles) of terrain. There is also a new “Park after Dark” with boxes, rails and a lot of hits.

Canterbury’s Mt Hutt, one of New Zealand’s largest ski area, features one of the longest vertical drops in the South Island at 683m (just under one-half mile).

Skiers and boarders will find the triple chair lift reinstated after an avalanche took it out at the beginning of the 2013 season. The new layout and approach to the load area makes it easier and quicker for guests to get onto the lift. There’s also a new “Sky High” mini terrain park near the top of the mountain. It’s aimed at beginners and intermediates, as well as those wanting to try freestyle riding.