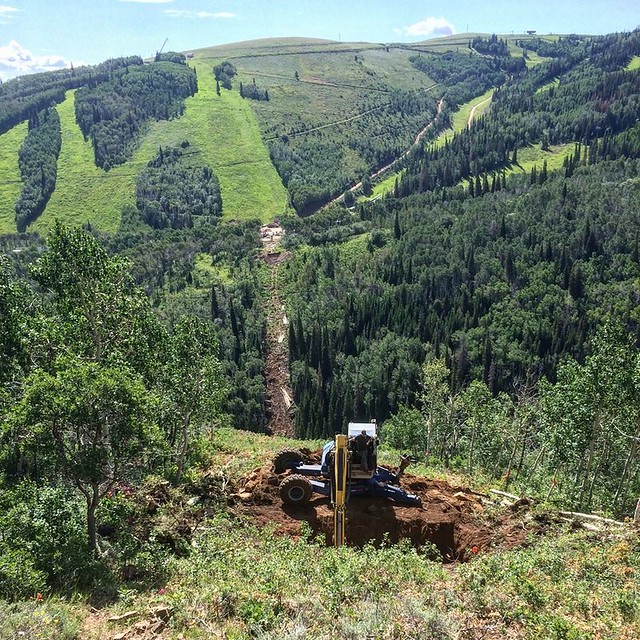 The sounds of $50 million in on-mountain upgrades echo across Park City this summer, as new owner Vail Resorts gets down to the business of creating the largest winter resort on American soil.

“All projects will be completed for the 2015-16 season,” Vail Resorts’ Margo Van Ness told SnoCountry.com.

The star of the show is the new eight-passenger gondola that will link Park City Mountain and Canyons Resort by ferrying skiers and snowboarders back and forth over Pinecone Ridge. By connecting the neighboring resorts, the Utah resort trail map now covers 7,300 acres of skiable terrain – larger than Big Sky in Montana (5,750 acres) or Vail in Colorado (5,289)

Skiers and riders may not, however, be able to hop the interconnect gondola, dubbed Quicksilver, right from the git-go. Mountain officials have said that there must sufficient snow to ski or ‘board down to the base of the new lift on either side. To make that happen sooner, Vail is installing more snowmaking on the Canyons side – particularly around the Iron Mountain Express that will serve the new gondola.

Lift installers are busy elsewhere. The fixed-grip Motherlode lift that loads near the Park City station of the new lift will become faster, while the high-speed King Con lift adds two seats to each chair. Both those lifts have been known to bottleneck on busy times in the past.

Diners will see improvements to the on-mountain eateries next season, too. There will be a new Snow Hut restaurant on the Park City terminus of the gondola, with 500 seats. The Summit House atop Park City will get a reworked traffic flow and more seating, while the Red Pine restaurant at Canyons will expand with 250 more places to sit.

This investment in eastern Wasatch Mountain after Vail Resorts succeeded in purchasing Park City Mountain Resort after signing up to manage Canyons Resort. The new conglomerate is now known simply as “Park City.”