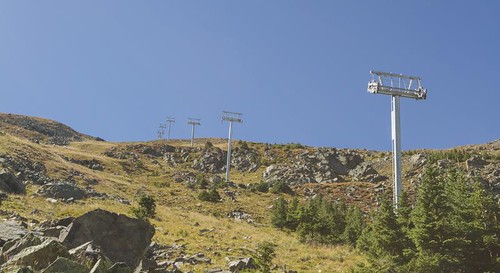 The lift towers are in, the cables set to be strung, and the buzz around Taos Ski Valley’s new chairlift to Kachina Peak is palpable.

For the first time the resort’s 58 years, skiers and snowboarders will be able to reach the mountain’s 12,481-foot high point without having to make a 45-minute hike. The new 1,100-foot, fixed-grip triple chair will take off east of Lift 4 and provide a five-minute ride to the above-treeline summit.

From there, the expert terrain on wide-open Main Street, the gnarly K Chutes and the narrow chutes above Hunziker Bowl await.

The $3 million chairlift is the first major project since the founding Blake family sold the Northern New Mexico resort to billionaire conservationist Louis Bacon at the start of last ski season.

The idea of a lift up Kachina Basin has been kicked around for years at the New Mexico resort, but the Blakes didn’t have enough money to build it.

Now, with Bacon’s backing, the lift will be set to go for this season – when the snowfall warrants. Inveterate hikers can still get find in-bounds terrain without lift access in Juarez Bowl and West Basin.

Here’s some other news on what’s new at New Mexico ski and snowboard resorts:

Angel Fire. A new beginners’ terrain park called the Railyard has been constructed off the side of green-trail Headin’ Home. The boxes, rails and jumps all have been built for visitors new to skiing and boarding. The resort is also moving the nighttime terrain park Night Rider to the Exhibition slope above the base area.

Sandia Peak. The Sandia Peak Tramway has a renovated summit terminal for skiers, snowboarders and sightseers who ride up from the Albuquerque side of the Sandia Mountains. Updated electrical, emergency and energy-saving systems, renovated restrooms, a backup generator, and visitor center all give the 48-year-old building a new look.

Red River. The resort has a new ski school director, Larry Simpson, who replaces longtime ski school leader Wally Dobbs. Simpson, who has taught and directed at four other U.S. resorts, was head of the Focused Learning Program for Vail Resorts before joining the Red River teaching staff last season.