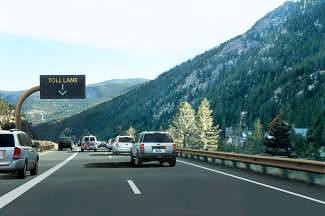 Colorado Skiers and snowboarders well know that traffic jams on Interstate 70 can be mind-numbing – especially on weekends – so they may not mind paying to travel a new express lane aimed at reducing congestion this winter.

Motorists will pay a toll – yet undetermined but at least $3 – to go a max 45 mph on the new lane that runs 13 miles eastbound from Empire, where I-40 intersects with I-70, to Floyd Hill where traffic crests before heading down into metro Denver.

Colorado Department of Transportation officials expect the lane, which runs as an inside lane next to the median, to be open about 72 days this winter and cut travel time from the mountains by about 30 minutes.

Highway officials expect 700-900 vehicles per hour on the new lane, reducing the hourly load of 3,000 vehicles on the main pavement to be cut by about a third. On off days, the lane will serve as a shoulder for safety and snowplowing purposes. 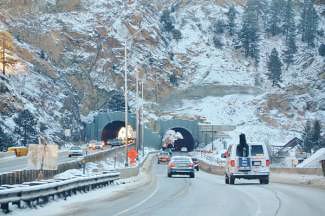 “We want to try to get enough people in there to impact traffic volumes in another lane,” CDOT’s Amy Ford said. “The goal is to pull people into the express lane and forestall the inevitable that will happen when you see congestion at its peak.”

The so-called Peak Period Shoulder Lane is part of a state-federal effort to relieve traffic during the busy ski season, where I-70 is the sole artery from Denver to mountain resorts. Other projects include the expansion of the Twin Tunnels outside Idaho Springs and the snowplow escort-ramp metering project for eastbound out of Summit County.

It’s about 60 miles from Denver to Summit County on I-70, and the interstate typically carries more than 40,000 vehicles a day during the ski season. The route is the main day-trip artery to seven major Colorado resorts, and connects motorists to another dozen beyond Summit and Eagle Counties. Especially on weekends, I-70 ferries thousands of motorists to these resorts.