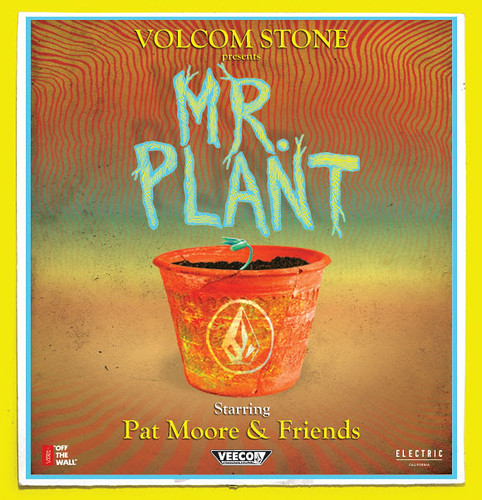 Mr. Plant, a Veeco Film production based on the travels of snowboarder and New Hampshire backwoodsman Pat Moore, follows Pat as he spends a season traveling around the world with the rest of the Volcom Snow family, friends and icons.

Shot on location from Moore's hometown mountain Waterville Valley to Jackson Hole, Japan, Quebec, Massachusetts and Minnesota, the film unfolds across the map to arrive at "the only destination that really matters: staying true to snowboarding."

The film’s introduction tells us the name “Mr. Plant” is An ever growing personality fed by snow, sun and friends. Adjusting to his environment. Always growing but always rooted, staying true to this.

“Mr Plant started as my nickname from Mike Rav, but it evolved into the theme of the film. Basically the film became Mr Plant and all the effort we put into it was feeding him, each shot was feeding Mr Plant!” Pat Moore told SnoCountry.com.

For Moore, staying true means “to keep to what you love. If you love doing something and you're passionate about it, there’s no effort into staying true.” As to adjusting to the different environments during filming, Moore told us, “We simply filmed whatever was in front of us, whether that was a huge wallride with Jake Welch or a bouncing dinosaur toy with Mike Rav, unbiased shredding.”

Moore told us the idea for documenting an entire season came about when he decided he wanted to make a traditional snowboard video “filming as much gnarly stuff as you can and putting it to good tunes.”

After spending a season traveling the world, Moore noted that “the best thing I learned from growing up snowboarding in New Hampshire is that it's not where you're at or what you're snowboarding on, but who you're with, having a good group of friends to snowboard with is most important.”

The world premier of Mr. Plant took place in Moore’s home town of Plymouth, Nh. “Just having my old friends and family at the premiere and having all the legends actually staying at my house was something I'll never forget!”

The film tour continues throughout the fall and will be available on iTunes, Xbox, GooglePlay and Amazon starting November 4.  Visit volcom.com for more or more information about the tour, including a tour schedule.