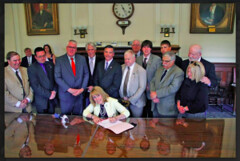 New Hampshire Gov. Maggie Hassan has signed Senate Bill 30 into law formally paving the way for The Balsams Resort redevelopment team, led by resort developer Les Otten, to apply to Coos County for a redevelopment assessment district and the Business Finance Authority (BFA) for a credit enhancement as part of its proposed $145 million Phase 1 plan.

The law, which will allow New Hampshire’s unincorporated places such as Dixville to be eligible for N.H. BFA support, is critically important to the redevelopment and expansion of the historic Balsams Resort.

“Senate Bill 30 is a critical piece of economic development legislation, giving unincorporated areas the same access to economic development resources as the rest of the state,” said Gov. Hassan. “This bipartisan measure is also an important step forward for advancing the Balsams redevelopment project, which is a bold vision for the revitalization of this historic resort with great potential to create jobs, boost the North Country’s economy, and have a ripple effect for businesses across the state.”

“We are pleased to have the opportunity to work with the County delegation and Commissioners and the Business Finance Authority. We truly appreciate the State’s overwhelming support,” said Otten. “By passing legislation that gives Coos County this opportunity, the State has enabled the North Country and our team to restore and expand this majestic resort, making it a world-class destination for all seasons and begin the revitalization of the North County.”

The plan also includes expanding The Balsams Wilderness Ski Area into the largest and most technically advanced ski resort on the East Coast. With a skiing base camp at 2,350 feet above sea level, in a true alpine climate zone, The Balsams is known to receive among the highest annual snow totals of any ski resort in the Northeast. At build out, it will offer 2,200 acres of alpine terrain accessed by 22 lifts, and 100 kilometers of Nordic Trails.

In less than two months, more than 100 people have reserved a position to purchase a Century Club residence when the opportunity becomes available. The Century Club was created to celebrate next year’s 100th anniversary of the Hampshire House, offering a limited opportunity to own a fully-furnished luxury one or two-bedroom residence in the structure, through a program that can eliminate some or all carrying costs.

The State of New Hampshire will benefit, too. Based on conservative projections of visitors to the expanded resort, Polecon estimates the additional annual rooms and meals taxes generated by the Balsams will range from $1.5 million in 2016 to $4.6 million in 2024.