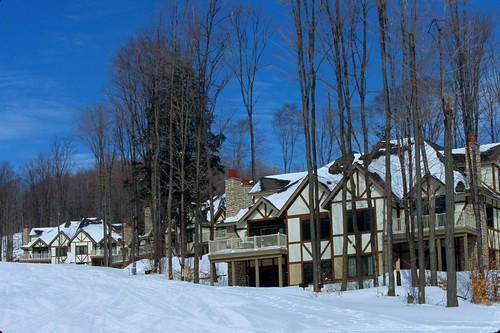 Real Estate properties at most mountain resorts saw a precipitous drop in sales prices and activity levels since the peak in 2006 and 2007-2008 economic downturn. But, things look like they’re starting to improve.

A SnoCountry.com sampling of mountain real estate trends finds the resort-property market is modestly rebounding with some areas and properties further along than others. Today’s buyers are mostly user-owners, with investors or “flippers” now rare. Buyers are making lifestyle choices.

At the Midwest’s Boyne Mountain and Boyne Highlands, “prices continue to slowly get better, neighborhood by neighborhood. However, some properties -- waterfront and ski-in/out townhomes -- are back to pre-2008 prices,” but mostly it’s still “a buyer’s market with no new product currently being developed,” says Boyne’s Steve Matthews, director of real estate and development.

While ski-in/out townhouses are selling in the $300,000 to $400,000 range, most products are substantially below peak pricing. The best values are condo-hotel units ($100,000-$300,000 for studio to three-bedroom whole ownership) which have very good rents, occupancy rates, and rental yields and are half 2008 prices. A number of lenders are keeping loans in house and interest rates are good, Matthews said.

“There’s not much ski in/out property except at privately owned ski areas so it commands high prices,” he explains, adding that year-to-date sales for $1 million-plus properties equal 2013; $2 million-plus sales surpassed 2013; and $5-$10 million (true ski-in or lakefront) are in limited supply but doing very well.

Phil Dodd, editor of the Vermont Property Owners Report, said sales are up in ski towns but prices vary with Stowe being “a market doing better than most.”

Statewide, ski condo prices have been falling and single-family home prices are down from 2008. Sales volume is above 2008 and while days on the market peaked in 2012, they’ve dropped but still take longer to sell. There are exceptions, Dodd said, saying one broker sold two houses within 10 days of listing in Killington.

Killington condo inventory dropped from 200 to 85 listings, and Ludlow (Okemo) saw condo sales double this year, Dodd said, noting, “Some real bargains are being snapped up.”

“Sugarloaf and Sunday River are seeing substantial increases in business levels and demand. In the last three years there has been a slow but steady improvement in values with most pricing a year away from 2006-07 values,” reports Mark Hall, vice president development for operator Boyne Resorts.