On the heels of Mount Snow’s West Lake project that is creating a 120 million gallon snowmaking water reservoir, the southern Vermont resort will begin the next phase of upgrades in their master development plan.

Included is the redevelopment of the Carinthia base area starting with the construction of a 38,000 square-foot base lodge that will house skier services as well as a kids training center.

In total, these projects will cost an estimated $52 million dollars, which Mount Snow is funding through the EB-5 foreign investor program.

Skier services will include a ski rental shop, lift ticket and ski school sales, retail and convenience store, bag storage service and kids activity room. The interior of the lodge is designed so that during the off-season it can be modified for conferences or other groups.

The lodge will also feature modern technology including wi-fi and outlets for charging electronic devices.

The new ski lodge will be the hub for future planned extensive upscale hotel accommodations and recreational facilities, including up to 150 luxury two- and three- bedroom residential units. Plans include an outdoor swimming pool, hot tubs, an ice skating rink and indoor exercise facility.

Following the development at Carinthia, projects will take place in the main base area of Mount Snow and the Sundance/Snow Lake Area, including up to 200 ski in/ski out residential units and several skier service buildings, replacing the original base area buildings in phases. 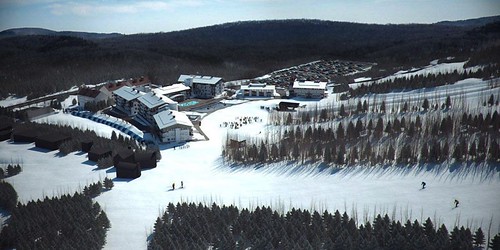