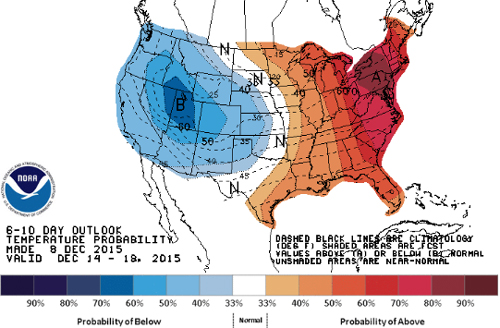 This season’s strong El Nino has had significant impacts on resorts across the country, especially in the Midwest and Northeast, where limited snowmaking opportunities have left resorts struggling to open for the season, and those that have, with limited terrain.

In the west, its a completely different story. From Whistler-Blackcomb in British Columbia, to Stevens Pass in Washington - which saw a significant avalanche Tuesday - to Sugar Bowl and Squaw Valley in California; the snow continues to pile up, with another storm set to deliver more.

All Resorts with New Snow

“Total snowfall by Friday morning looks like it could be around 15-20 inches in the Village, and 20-34 inches up on the mountains,” said Opensnow.com Tahoe forecaster Bryan Allegretto of the next storm to hit Squaw Valley.

More Cold And Snow In West

Another storm is set to roll into the Rockies this weekend, with 3-6 inches for Colorado resorts such as Vail, Aspen, Steamboat and Telluride, all of which are off to a great start to the season. The Tahoe region will see yet another storm Sunday, along with colder temperatures and more snow. That storm will roll west into Utah and Colorado with even more snow next week.

Pretty much every resort from Whitefish, MT, to Jackson Hole, WY, Snowbird, Park City and Copper Mountain will see fresh snow over the next 3-10 days, making for some outstanding skiing and snowboarding conditions.

“Friday should be a good powder day (at Copper Mountain),” noted OpenSnow.com meteorologist Joel Gratz. “Saturday and Sunday will be drier with times of flurries or a snow shower, then the next storm should bring heavier snow and possible powder days on Tuesday (Dec. 15) and perhaps Wednesday (Dec. 16).”

Winter Returns to Upper Midwest
A late weekend storm may deliver a few inches to Northern Minnesota, Wisconsin and the Upper Peninsula of Michigan, just enough to freshen up the surface at Wild Mountain, Lutsen, Ski Brule and Boyne Mountain.

Spring Skiing in the Northeast
A big warmup is coming for the Northeast through this weekend and into early next week. Resorts such as Killington, Okemo, Stowe, Mount Snow in Vermont, will feature spring-like conditions this weekend. However, open terrain is limited and terrain expansion will also be significantly limited until snowmaking temperatures return late next week.

“There are some signs of a slight pattern shift with the jet stream perhaps finally shifting eastward and offshore,’ Open Snow Northeast forecaster Brian Clark noted on his blog. “If this were to happen, it would allow more seasonable air to come in, and there is also the chance for a coastal storm later next week."