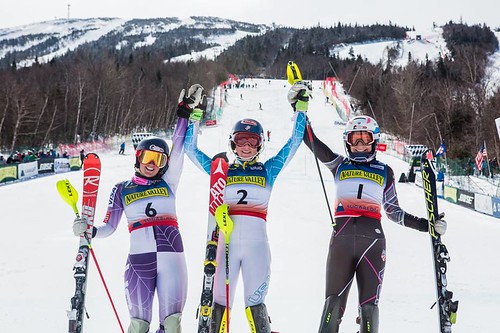 In front of a huge crowd cheering Shiffrin’s name, she threw down her first run with a time no one could beat. Second run, did the same. But Moltzan was on her tail.

“Last year I was four seconds behind her every run and now I’m two, so it’s going down!” Moltzan joked after her second place finish. “It’s nice to have a benchmark to see how you’re progressing in your skiing.” Moltzan, a slalom specialist who is often compared to Shiffrin, won this year’s World Junior Championships. Although more than four seconds off of Shiffrin, Moltzan did hold a hefty 2.5 second lead over the rest of the field, as well—showcasing the dominance of both of these young women.

Even after winning the World Cup slalom title and World Championships slalom medal this year, Shiffrin said she was thrilled to be in Sugarloaf, competing at the U.S. Alpine Championships in front of the home crowd. Many of the audience members came over from Burke Mountain Academy, where she went to high school. “These kinds of races mean a lot because of who comes. It’s the next generation of skiers who shows up and watches and hopefully gets inspired by all of the racers—and not just by me or just the U.S. Ski Team athletes,” said Shiffrin, who has now won four national titles. “It’s cool for me to see the excitement. It makes me excited too. It’s the perfect way to end the season and get ready for the new season.”

Shiffrin remembered her first time competing at the U.S. Alpine Champs, as well, and cited it as a turning point in her ski racing career. “I see a bit of myself in all of these kids because it was not so long ago that I showed up for U.S. nationals for the first time and was thinking, ‘I don’t know if I can do well here. I don’t know if I’m that good of a skier,’” she said. “So it’s been since then—that first U.S. nationals. It’s been going quite quickly.” Shiffrin won her first U.S. Alpine Championships slalom race.

The men's slalom closes out the championships Sunday. 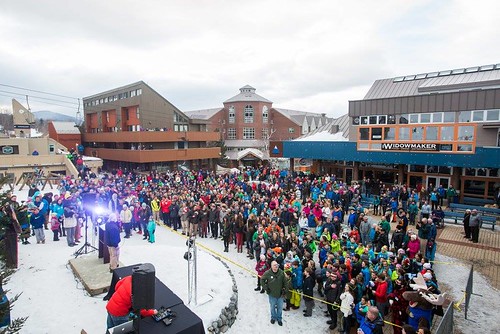