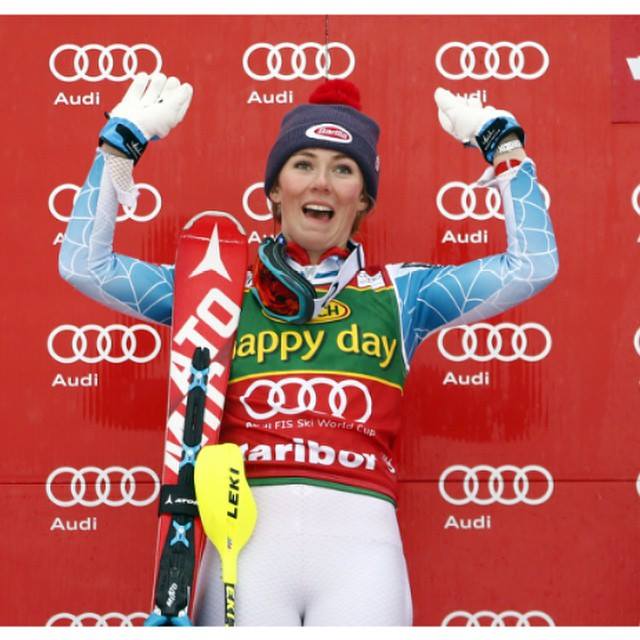 She ran fastest in the opening slalom run and didn't let anyone come close in the second, clocking a combined time of 1:39.12, with the rest of the pack more than one second off the pace.

“Sometimes I like skiing in the sun too,” Shiffrin said laughing. “We had a little bit of both this weekend. The rain doesn't bother me too much.” She had finished fifth in Saturday’s Giant Slalom.

Shiffrin built a substantial lead in the first run Sunday as she was 0.68 seconds ahead.

“I felt like I really I had to attack in the second run,” said the 19-year-old. “I feel best after my races when I try to put two really good runs down and in each one I try to be better than in the last. But I knew I had a little bit of time so I had to be smart and not go crazy, because the goal is to get the globe this season. I think I was a little bit smart in the second run, but I was still pushing it.”

Slovakia's Veronika Velez Zuzulov moved up from 8th position after the first run to finally finish second, 1.03 seconds back, for her first podium finish this campaign.

Czech Sarka Strachova, who earned bronze at the World Championips, managed to hold on to a podium spot, for her second top-3 finish this season.

Overall World Cup leader Tina Maze was eager to bounce back from the disappointing performance in the giant slalom on Saturday. However, the 31-year-old, who sat in sixth position after the first leg, straddled in the second run and failed the stretch out her lead in the overall standings.

With today's results, Mikaela Shiffrin moved up to first place in the slalom standings.

"The slalom globe is very close to my heart," concluded Shiffrin. "It was my entrance onto the World Cup circuit and to having success in my career. I really hope I can hang on to this. I really have to fight for it in the next two slalom races."

The Ladies World Cup tour heads to Bansko, Bulgaria next week for two super-G races and an alpine combined.

On a turny course with plenty of rhythm changes in Saalbach, Austria’s Matthias Mayer was able to find the perfect pace and grab his second victory in a row. With a time of 1:31.53, Mayer took home his first victory in a super G, a success he attributed partially to the recent giant slalom training he had been focusing on.

Adrien Theaux made the news two days ago when the photo of his spread eagle over the Audi built into the final jump went viral on social media, but today it was his first World Cup podium of the season, a 2nd place in the super-G that got him smiling.

With a time only 0.27 seconds slower than the winning one, Kjetil Jansrud grasped his fourth podium. American Travis Ganong was 9th.

The men’s speed action continues in Garmisch Partenkirchen, Germany next week with a downhill and giant slalom.