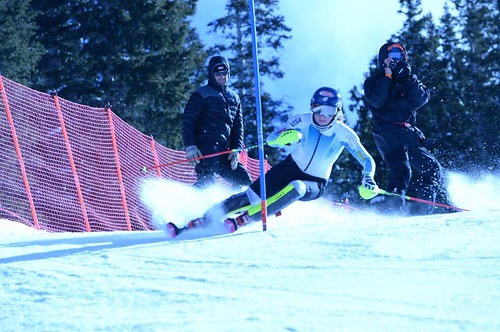 “That was a pretty incredible race,” said Shiffrin, who suffered a knee injury warming up for a race in December. “I’m glad it’s over, but I enjoyed skiing that last run, it was really rough and a challenge at every single gate. It was just bumpy and a wild ride – tough, but a good fight, and that’s the way it should be."

Proving that her rehab and training over the past couple of weeks had prepared her to return to top form, Shiffrin soaked up the first run sunshine and support from an enthusiastic crowd cheering her to the finish. She cruised into the first-run lead by 0.27 seconds.

“I was really nervous for the first run,” she said. “So nervous that I thought I left my legs at the start. But the second run was better, I felt like I was back in the groove.”

Starting as the final racer in the second run, Shiffrin watched as racer after racer battled deteriorating course conditions and visibility issues as clouds shrouded the upper portion of the course. In dominating fashion though, she extended her first-run advantage through the rutted course and cruised to victory by 0.45 over France’s Nastasia Noens. Marie-Michele Gagnon of Canada finished third.

“There were some scrappy turns … none of the girls skied their best, and I didn’t ski my best,” Shiffrin said of the challenging course conditions. “It was just one of those things where you had to be really mentally tough, and I’m glad my mental side is there, because that component is tough to get back.”

Resi Stiegler (Jackson Hole, WY) skied to her best slalom result of the season in eighth.

Up next, the women’s tour moves to La Thuile, Italy for two downhill races – including a make-up from Crans-Montana – and a super G race Feb. 20-21, then to Soldeu-El Tarter, Andorra for super G and alpine combined events Feb. 27-28. Jasna, Slovakia will host giant slalom and slalom events on March 5-6.