Mikaela's Back; Plans To Race Feb. 15 In Switzerland 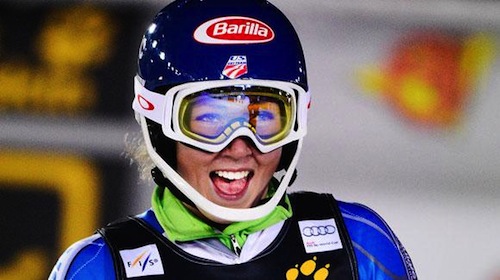 Olympic and World Champion Mikaela Shiffrin from Vail, Colo. has alerted the ski racing universe via social media that she plans a return to the snow Feb. 15 for a World Cup slalom in Crans Montana, Switzerland. Shiffrin injured her right knee while warming for a Dec15 giant slalom in Are, Sweden.

“A lot of people have been asking when I'm going to race again.,” she wrote on her Facebook page. “I said that I hope to race at the end of February or early March, but you may have heard that the canceled slalom from Maribor has been rescheduled for Crans Montana on February 15. And I'm going to be there! Sooo.. See ya in a week!”

The knee injury was a torn MCL, bone bruise, and hairline fracture, but it did not require surgery. She has been training in Colorado, reporting the knee was “feeling fine.”

Shiffrin won the first two slaloms this season in Aspen before the injury. A likely scenario had been set up that had Shiffrin and Lindsey Vonn both making a run for the overall World Cup title. Vonn races downhill, super G and giant slalom. Shiffrin races slalom and giant slalom. Vonn has been dominant on the circuit all season and is in the lead for the title. Pho

Photo: Mikaela Shiffrin on a happier day in Sweden in 2012 (USST)