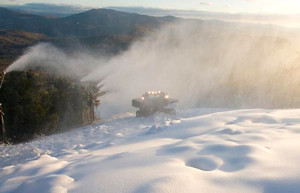 The forecast is calling for temperatures in the 20s, so Sunday River's Mountain Operations Team is pulling out the big guns with plans to bury the resort's T2 Trail and kick off the 2015-16 ski and snowboard season on Monday, October, 19. With one exception, this will be the earliest the resort has opened in almost 20 years

The Maine resort announced Wednesday (October 14) plans to open for the season Monday at 9 a.m. The resort expects to open on the upper T2 trail, accessible via the Locke Mountain Triple lift in Barker Basin. All plans depend on weather and snow conditions; keep an eye on the resort website and check the resort’s social media channels for the most up-to-date information.

"After looking at the forecast at this afternoon's mountain operations meeting, we decided to go for it," Sunday River's Sarah Devlin told SnoCountry.com. "The temps will be dropping and if we start making snow on Sunday we can open on Monday. Our pass holders are always so eager to get on the mountain this time of year, and we are excited to be able to offer an early start this year."

The current forecast for western Maine shows temperatures dipping into the 20s and even the teens heading into the weekend, allowing for an extended snowmaking window on Sunday River’s Locke Mountain peak. Lift tickets will be $29 for all ages and available to purchase at the Barker Lodge. All 2015/16 New England Passes will be available to purchase or pick up at the South Ridge Lodge.

Sunday River is known for its snowmaking, typically opening on or around Halloween. The resort expects to open for Monday then begin its early season schedule, open weekends only until mid-November. In keeping with tradition, skiing and snowboarding will be free on Halloween, which falls on a Saturday this year, for anyone in costume.

Last season, the resort opened on November 3 and, in 2013, lifts started spinning on October 26. Other than opening on October 14 in 2009, this is the earliest Sunday River will have opened in almost 20 years.

Photos: Top -- Sunday River did its first snowmaking test of the the year Sept. 22 and hopes to be the first to open in the country on Monday. (Sunday River/ Facebook); Passholders and loyal Sunday River fans will be glad to find some corduroy on T2 Monday morning. (Sunday River/Facebook) 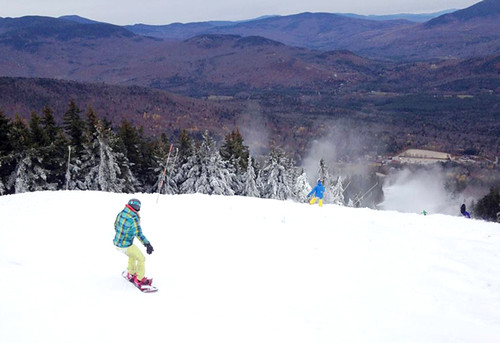 Tweet
Tags:
Maine Sunday River
Classic Echo Mountain To Reopen As Closest Ski Are...
RealSkiers: In Praise Of The Apprentice