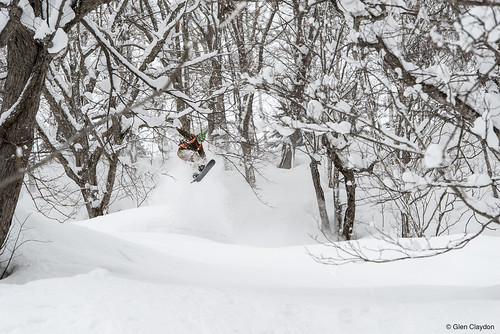 Along with digging winter gear out of the closet and tuning up the boards, viewing a Warren Miller film to welcome back ski and ride season is fall ritual for many. This fall, Warren Miller releases its 65th film, No Turning Back.

Since 1949, the annual film tradition has been marking the beginning of colder weather with premier cinematography of some of the best snowsports athletes delighting in snow playgrounds around the world.

The newest installment pays homage to 65 years of mountain culture and adventure filmmaking.

Although Wescott had been to Japan before for several World Cups, this was “by far the best Japan trip of all time for me. The pow just never stopped coming. It was so much fun to go with no goal but to find and ride fresh snow,” Wescott told SnoCountry.com. “We had a couple resort days where it was pretty much too deep to film because you just couldn't carry speed, but other than that it was perfect because after the first couple of days we had a blank canvas to work with everyday. We just had to make a plan and go shred till our legs were kicked.”

While in Japan, he met Taro Tamai, a pioneer in snowboard design. “Meeting with Tamai to talk board shapes and design was also a highlight as he is really the guru of the Japan snowsurfing movement.

“The style esthetic of it looks way more like surfing: everything is a roundhouse style turn followed by the occasional slash. I have always focused on doing full rail-to-rail turns and using all your sidecut. My background of growing up as an east coaster taught me that, because you have to be able to truly carve growing up here.”

About meeting Tamai he said,  “I just think Taro looks at boards as more of a shape than looking at it as numbers to create a shape. Watching him feel a sidecut and camber and early rise, he will spend minutes sliding his fingers along the rail. It’s much more of a physical relationship with the product like a surf shaper would have. When he rides it’s all about drawing a round line and fitting that into the natural terrain.”No Turning Back kicked off its tour in Salt Lake City, Utah, Oct. 18. Visit warrenmiller.com for more information about the national tour, including a tour schedule.