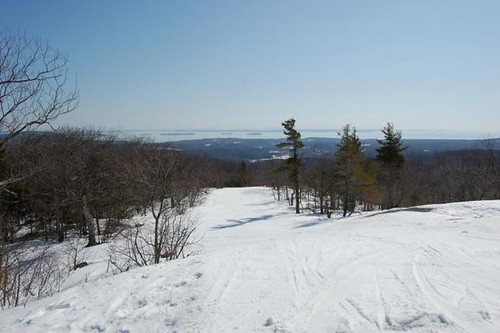 Overlooking the Atlantic Ocean on the rocky coast of Maine, Camden Snow Bowl embarked on a $6.5 million redevelopment this summer that has been in the works since 2008. They hope to have all but a new lodge completed by Dec. 20, opening day for the season.

One of the main goals of the project is to have an improved area for beginner skiers to enhance their experience. The municipally owned ski area is a major resource for the area’s kids to learn to ski and ride and take part in other winter activities.

Improvements to the beginner area include 15 additional acres of terrain, and increase of 40 percent, and a new conveyer lift to replace a challenging handle tow.

“We want to lower the entry barrier for beginners and dramatically improve our ability to attract and teach new skiers,” Camden Snow Bowl’s Andrew Dailey told SnoCountry.com. The redeveloped area will have 60 acres of trails plus eight glades.

In its efforts to make the terrain more beginner-friendly, trails have been regraded and widened. “We want to take any intimidation away for our young skiers,’ Dailey told us. The existing double chair has been taken down, cut in half, and moved to the beginner area to access a new beginner trail. This will replace a rope tow to the summit that was another challenge for beginner skiers.

A reconditioned 4,000-foot triple chair purchased from nearby Shawnee Peak is currently being installed from the base to the summit, giving skiers access to 850 vertical feet of terrain.

85 percent of the mountain will now be covered by snowmaking, more than doubling their snowmaking capacity, and expanded night skiing will also be offered, giving greater opportunities to the many school groups who flock to the mountain.

$4.5 million of the total cost has come from privately raised funds. The town overwhelmingly passed a $2 million bond vote last November for the remaining cost.

“It’s amazing to see how positively the town has rallied around this community resource, even in the face of an economic downturn,” said Dailey.

Plans for a new base lodge are being finalized now for spring 2015 construction.

Bringing young new skiers and riders to the sport has always been a big focus for the mountain. “We’ve offered a 4th grade program to 14 schools for 25 years, introducing 500 kids a year to skiing. We think this is a great way to introduce skiing to kids that wouldn’t normally have that opportunity,” Dailey said. “Then they can follow up with Maine’s WinterKids program in 5th, 6th and 7th grade.”

Camden Snow Bowl will host an open house Dec. 7 from 1-4 p.m., where the public is invited to see the progress of the new Snow Bowl and meet all the people who’ve been involved in making it happen.