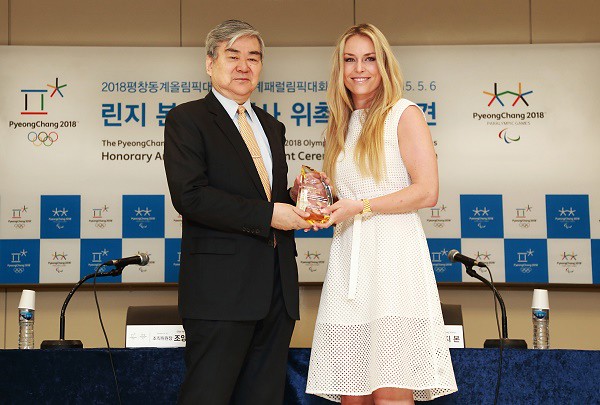 Olympic gold medalist Lindsey Vonn made it clear she was sticking around to try to mine some more gold at the 2018 Winter Olympics in PyeongChang, South Korea. The American superstar, who engineered a dramatic post-injury comeback last winter, was named the first International Ambassador for the Games.

"My goal for the next Olympics are to try to win gold medals. In the last Olympics, I competed in Vancouver and won the downhill. I hope to improve upon those results or, if not, to match them.” Serious injuries kept her out of the Sochi Olympics.

Vonn was in South Korea with a U.S. Olympic Committee delegation, along with U.S. Ski and Snowboard Association officials who signed an agreement with the Korean Ski Association to foster greater awareness and education about skiing and snowboarding in the country.

She gave a thumbs-up to the new downhill course. "It’s been a great trip to Korea so far. We were able to look at the (alpine skiing) venue yesterday and everything is coming on very well. PyeongChang 2018 is doing a great job in the preparations, so I look forward to the test events coming up in the next two years and the Olympics.

"The course looks very challenging," Vonn said. "It looks like the downhill will be very stiff with lots of jumps, which I really like. I am looking forward to seeing it with snow on and actually be able to run the course, but so far it looks really good."

Four jumps have been cut into the hill, and a gondola and snowmaking system is scheduled to be installed this summer. Two World Cup speed events on the track are scheduled for the upcoming 2015-16 season in order to prepare athletes for the Olympic Games. “

PyeongChang 2018 President Yang-Ho Cho was also enthusiastic about Vonn’s new position. “She is a very famous, well-known, world-class ski racer, but what I really admire about her is her passion and fearless spirit,” said Cho. “We believe that she will truly be an excellent Ambassador promoting the PyeongChang 2018 Games to the world.”

Photo: Lindsey Vonn named ambassador for 2018 Olympics where she plans to compete. (POCOG)