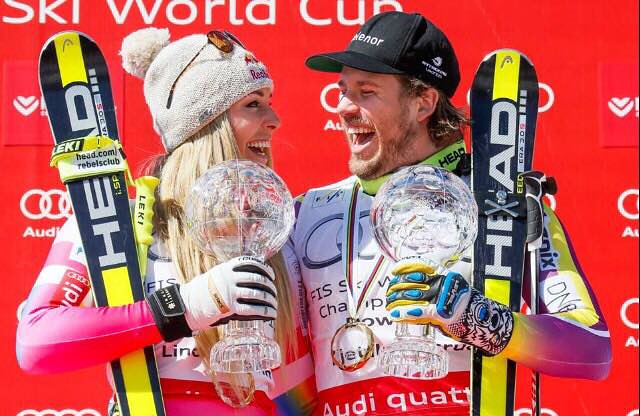 Vonn brought a 35 point lead over Fenninger into the final, essentially needing to stay ahead of the Austrian. Fenninger skied 16th, one spot before Vonn, and had a troubling run to drop into fourth. All Vonn needed was a top-15 to take the title. But she went out charging in the soft snow to move into a convincing lead. Goergl was the only challenger and couldn't top Vonn. Slovenia's Tina Maze was fourth, narrowing the gap behind Fenninger to just 12 points for the overall - a battle that is expected to go down to the final race this week.

It was an emotional finish for Vonn, who suffered a catastrophic injury mid-season in 2013. It was her seventh World Cup downhill title and 18th crystal globe. Despite her injury in 2013, Vonn still won the downhill title that season, her sixth straight at the time.

"I'm so proud," said Vonn. "This is the most meaningful globe I’ve ever won. It’s incredible after being out for two years with two major knee operations to come back here and get the downhill title - it means so much to me. I want to thank everyone who helped me get back here."

Vonn had been concerned coming into the Finals that she had not skied in Meribel, having missed the preview World Cup two years ago. She skipped last weekend's technical races in Sweden to spend extra time training at Meribel, which was the site of the women's races at the 1992 Olympics. The strategy paid off as she skied with confidence in springtime conditions.

In the first World Cup Finals race of the week, Steven Nyman from Sundance, Utah was the top American, taking fourth place in the downhill. Kjetil Jansrud of Norway won the race, and snagged the downhill crystal globe.

It was a beautiful day for the downhill in Meribel, France, with sunshine and warm weather stoking the roaring crowd. Marco Sullivan (Squaw Valley, CA) was the first American racer out of the start, and took eighth overall—a solid finish for the World Cup veteran. Travis Ganong (Squaw Valley, CA) took ninth and Ted Ligety (Park City, UT) was 24th.

The downhill title came down to Jansrud and Hannes Reichelt of Austria, with Jansurd required to finish ahead of Reichelt to ensure the globe. But Reichelt’s 10th place finish wasn’t enough to usurp the globe from Jansrud, who threw down an amazing run to take the win ahead of Didier Defago of Switzerland and Georg Streitberger of Austria. Behind Jansrud, Reichelt finished second in the downhill standings, followed by Guillermo Fayed of France.

Nyman was excited about his fourth place finish, although he just missed the podium by .26 seconds. It was more about his successful season for him—finishing sixth in the downhill standings, his career-best result.

“Consistency was my main goal and I was pretty consistent this year,” said Nyman, who has been plagued by injuries and crashes in past seasons. “To end like this, I’m really happy with it. Hopefully I can carry it into next year. I started outside the 30 this year so my main goal is to get in with the top guys and really push for a title next year.”

The super G takes place Thursday, with Andrew Weibrecht (Lake Placid, UT) as the only American racing. Jansrud has already won the super G globe, with the rest of the men competing for second place. Jansrud sits behind tech-specialist Marcel Hirscher of Austria in the overall standings by 64 points.