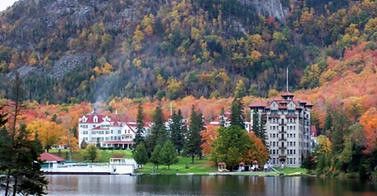 Otten joined a local effort to redevelop the grand hotel and ski area last year. He told the Chamber the plan calls for spending about $100 million for the first phase by 2016. He wants to bring the resort back to the point where it will be “World Class” again with golf, alpine and cross-country skiing, ATV riding, a wedding venue and site for major events. He said the plan is to use local products and services from local farms.

Most important, the well-known ski industry entrepreneur said there have been no “red flags” and N.H. officials “have been working to make it happen.” A major task remaining is gaining access for enough water to expand skiing terrain coming from the Androscoggin River 12 miles away.

“We can’t fulfill the needs without water,” Otten said. Permission to draw from the river is needed from the N.H. Dept. of Environmental Services and the U.S. Army Corps of Engineers.

A report from WMUR TV says Otten was welcomed by State Sen. Jeff Woodburn who represents the area and Executive Councilor Joe Kennedy. The pair noted the enthusiasm in the room for Otten’s plans.

“This community supports what you are doing and we will be a great neighbor,” Woodburn said, noting the resort is “not on the main path. We are a little bit off the beaten path. So, for us to succeed we need to be of a grand scale.”

Otten drew sustained applause when he said the vision for the campus includes 1,000 four-star hotel rooms. Food-to-farm provisions, pure water, and has the goal to grow the local economy. He said the project has the potential for more than 1,500 jobs. The campus won’t be built like a “Tyrolean village, but rather more of a campus atmosphere… with all buildings relating to one another.”

He told the group the primary market is the “X Generation and children of the 25-35 year olds. He is “optimistic” that the answers to all remaining questions can come soon “so that investors can buy in.”

“If the state can deliver on what they say,” he said. “It will happen sooner than we think.”