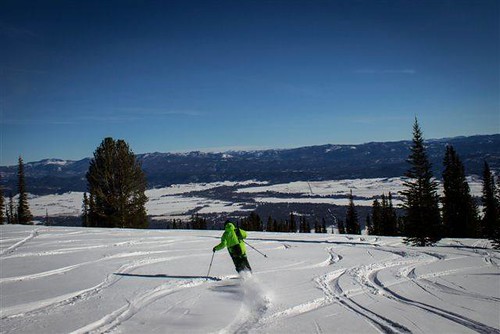 The central Idaho resort has emerged from bankruptcy with a new owner, New TRAC, and a lease for the 2,100-acres of state-owned land beneath the mountain – both critical developments for getting the resort back into full operations.

"This was a big step for us," David Papiez, project manager for New TRAC, told local media. "Tamarack is a full, four-season resort, but the ski mountain is really what we center ourselves around."

Opening date is set for mid-December, although a specific day has not yet been announced.

For this season, Tamarack will be without the high-elevation Wild Wood Express lift, which was dismantled in 2012 during bankruptcy proceedings. Without the lift, only about one-third of Wild Wood Bowl will be reachable by a chairlift.

However, the rest of the 900 acres and 2,800 vertical feet on the mountain should be accessible by the remaining six lifts, officials say.

Tamarack was opened in 2004 as a year-round, major destination resort. But plans got waylaid in 2008, when the former owner disappeared and his banker, Credit Suisse, had to assume the assets. The bank was the sole bidder in a bankruptcy auction last March.

Since 2009, the resort has been run by the homeowners association that encompasses some 400 properties around the base of the mountain. The association reduced lift operations for four days and cut staff.

As they reassert their position on the Idaho resort map, New TRAC officials have faith that the mountain will continue to bring regional skiers and riders from Boise, and destination visitors from Spokane, Seattle and Portland – while rebuilding the brand for a larger audience.

"The first step is to really start with that robust marketing campaign, making sure everyone knows that the ski resort is open and healthy," Papiez said.

There will be familiar faces around the resort this year, as the new ownership will retain the management team from the homeowners association to run the resort this season, according to Papiez.