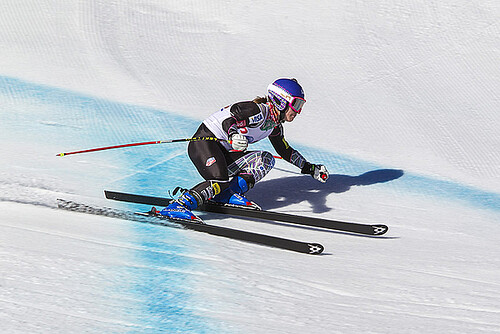 Laurenne Ross from Bend, Ore. threw down a clean and strong run to take fifth place and lead the Americans in the La Thuile, Italy downhill Friday. Lindsey Vonn lost a ski and did not finish the race.

“It feels good to be in the top five again,” Ross said. “I am feeling more comfortable now than I have all year, and that confidence is building with time and results.”

It was the first time the Audi FIS Ski World Cup tour visited the challenging and steep La Thuile track. The snow was grippy and dry, allowing the ladies to pick up speed and crank sweeping turns. Even with a big mistake, Lara Gut of Switzerland dominated the field, winning by more than a second over Austrian Cornelia Huetter. Nadia Fanchini of Italy grabbed a podium spot in front of the home crowd, finishing in third.

Vonn was looking for her 77th World Cup win, but it was not her day, as her outside ski rattled off at the top of the course. Vonn’s DNF coupled with Gut’s victory slotted Gut back into the top position for the overall World Cup title with 1,073 points, a slight margin of 13 over Vonn.

“I was getting a little bit bounced by the ice there and I was a little bit inside with my body position and my ski just came off,” Vonn said. “I’m definitely disappointed. I thought I was skiing really well. That’s pretty much the one thing, besides the weather, that you can’t control. I did my job, and hopefully tomorrow my skis will do their job. I’m definitely going to be fired up for tomorrow.”

After finishing fifth in Garmisch at the beginning of February, Ross showed that she can consistently break into the top 10. She found speed all the way down the La Thuile course, displaying her strength and finesse to take fifth.

Next up, the ladies race another downhill Saturday, followed by super G on Sunday. The overall lead is still up for grabs.

Top American finisher was Jared Goldberg in 20th spot, while Bryce Bennett was 21st. Andrew Weibrecht did not finish the first run. Downhill portion of the combined will be run Saturday.

Tweet
RealSkiers: Best Way To Demo Skis
Ski Or Ride With The Legends And Improve Your Game