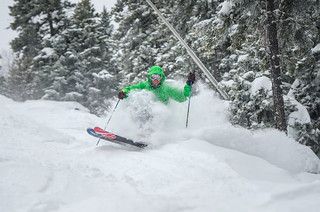 Mad River Glen is calling it "Epic!" Sunday River claims "this is unbelievable!"

Three weeks of back to back to back storms have delivered more than four feet of snow to most resorts throughout the Northeast. Whether you call it "face shots," "free refills" or "blower pow," the conditions are indeed quite incredible - and deep!

"Sunday River has received a foot of snow since Saturday night. In the past two weeks, we've received 57 inches," said Sarah Devlin, Sunday River's director of communications. And the best part is, "because of the cold temperatures, the snow is staying light and fluffy."

While big storms and deep snow are nothing new to the Northeast, this season the region has out-paced powder powerhouse regions, including Colorado and Utah. As of Feb. 9, Alta, Utah had received 193 inches, while Vermont's Jay Peak Resort has tallied 223 inches. In fact, the only other resorts with more snow this season are Wyoming's Jackson Hole (272") and Grand Targhee (238"); and Alaska's Alyeska (235").

And, there is more snow on the way.

"Our next snowfall comes Thursday or Friday as another Clipper storm moves through," wrote OpenSnow.com Meteorologist Brian Clark in this week's Powder Forecast. "At this point, it looks like snowfall amounts will generally be on the light side, although I wouldn't be surprised to see a few resorts push toward the 6 inch mark."