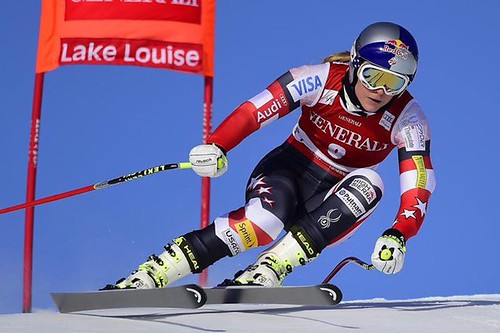 South to Beaver Creek, Colo: Olympic Champion Ted Ligety won his first World Cup race this season, coming from behind to take a giant slalom Sunday. Ligety was fourth after the first run, but posted a two-run time of 2 :34.07 seconds. He was .25 behind Austrian Benjamin Raich after the morning run and ended up winning by .18 over France’s Alexis Pinturault following the finale. Austrian Marcel Hirscher was third. American Tim Jitloff was ninth. Ligety is recovering from wrist surgery.

Original Story Saturday, Dec. 6: The number 15. That’s how many times American superstar Lindsey Vonn (Vail, Colo.) has won World Cup races at Lake Louise, Alberta. It’s why her fellow racers have nick-named the resort Lake Lindsey. She’s back atop the podium and with her were Stacey Cook (Mammoth, Calif.) in second and Julia Mancuso (Squaw Valley, Calif.) in third. Lauren Ross (Bend, Ore.) was sixth.

Vonn, who had a promising first race back day in Friday’s downhill, turned on the gas Saturday, finishing the tough course in 1:50:48. Cook came in at 1:50.97 and Mancuso at 1:51.05. The closest European stars to them were Slovenian Tina Maze, who won Friday’s downhill, in 8th spot with Austrian Anna Fenniger in 9th and Luxembourg’s Tina Weirather in 12th. Fenniger and Weirather were second and third Friday.

Vonn was seriously injured in a training run leading up to the World Championships two years ago. Her comeback last November was thwarted when she re-injured her knee and required more surgery, forcing her to miss the Olympics. She said following the race Saturday that she trusts her knee following that second operation.

The last time Vonn won a race was Jan. 26, 2013, in Maribor, Slovenia. Less than two months later, she tore her knee in that downhill training run before the Worlds Championships, leading to the first of two surgeries. She is two wins from matching the World Cup record of 62 race victories held by another superstar — Annemarie Moser-Proell of Austria.

But, she’s back in the hunt with a vengeance in just her second race of the new World Cup season. A super G Sunday will conclude the WinterStart race weeks at Lake Louise.

Andrew Weibrecht (Lake Placid N.Y.), known as the War Horse, was the top American in 10th. Ted Ligety, who's racing with a broken left wrist, was 11th.

A Giant Slalom finishes off the Beaver Creek races Sunday at the site of the World Alpine Skiing Championships in February 2015.

Photo: Lindsey Vonn is back atop the podium at Lake Louise (Lindsey Vonn/Facebook)