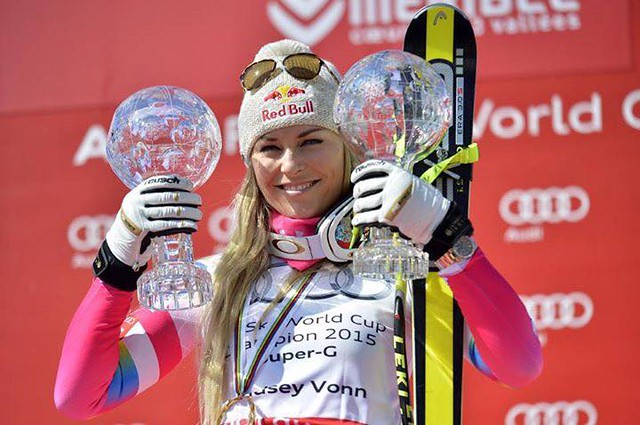 American Lindsey Vonn picked up her second Crystal Globe at the Audi FIS Alpine World Cup Finals in Meribel, France after winning the super-G season title, 28 points and 0.49 seconds, ahead of Austrian Anna Fenninger. Only eight points separated the speed queens entering today’s race, making it a fight to the finish.

Fenninger came down with Bib 15 into first place with a time of 1:08:19. All the Austrian could do was wait and see what Vonn would do four racers later. By the second interval it was clear that Vonn was on top of her game as she already built a 0.41 advantage. By the time she crossed the finish line, she held a 0.49 lead and cruised to her second speed title of the 2014/15 season.

“Anna put a lot of pressure on me. I knew she was leading when I was at the top and I just skied as hard as I could,” said Vonn. “I was definitely on the limit, especially at the bottom. I just attacked like I had nothing to lose. I’m just thrilled with the win today and the second Crystal Globe this season.”

It was an amazing 19th career Crystal Globe for Vonn and her fifth-career super-G title. It is also the fifth time that Vonn has won both the super-G and downhill titles in the same year, a record in ladies’ skiing.

Today was Vonn’s eighth speed victory in an amazing comeback season and her tenth podium.

“I think this year was up-and-down,” said Vonn of her comeback season. “I didn’t have a chance to get in a lot of training because of my injuries. But when I have training and I have confidence, I ski like I did this weekend.”

Tina Maze (SLO) finished in third place behind the duo in both the race and in the super-G season standings.

Norway’s Kjetil Jansrud ultimately finished in second place just 0.05 seconds behind underdog Dustin Cook of Canada and won the super G season title. Cook has come on extremely strong late in the season after winning the silver medal in the super-G at the FIS Alpine World Ski Championships in February in Vail.

But today was the icing on the cake for the Canadian as it marked his first-ever World Cup victory.

“This was the goal for sure, I really wanted to win,” said Cook. “I’m definitely not used to this, maybe someone like Kjetil who wins a lot, but this is all new and all exciting for me and I couldn’t be happier. It’s unbelievable,” said Cook.

No Americans finished in the top 10. Next up at Meribel: Nation’s team event.

What It Means: The only word to describe Lindsey Vonn's comeback from serious injuries to win two Crystal Globes at this week's World Cup finals in France is "amazing." Any disappointment by not winning at Beaver Creek in the World Championships in February has long dissipated in the wake of her astounding performance down the stretch. What else can we say? "Viva Lindsey."

Photo: Lindsey Vonn on the podium with both Crystal Globes won in Meribel (Lindsey Vonn/Facebook)