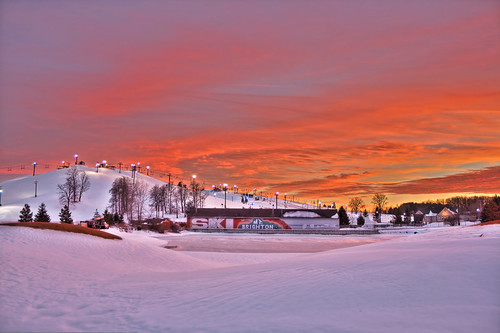 The Highlands is expanding lift hours on the Interconnect and North Face chairlifts, keeping them open on a daily basis all winter long, which means more time to enjoy the popular North Face area. The tubing area is being expanded to six individual lanes. The Burton Riglet Park, for 3-6 year olds, is being moved to the Camelot beginner area, which will bring all beginners into one area. They will continue to be the only ski area in Michigan offering a 13-foot halfpipe. Cross country grooming will be improved with the purchase of a new tracker, and more fat tire bike trails are being offered this winter.

Boyne Mountain is expanding lift hours for the busy Disciples area and more glade clearing took place this summer, which now accounts for nearly 30-percent of the mountain’s total 415 skiable acres. Two new ziplines, including a canopy feature, have been added to the Zipline Adventure Tour, the tubing park will be offering concessions.

Nubs Nob added more snowguns to their already heavy arsenal bringing their total number of snowguns to nearly 300, which is why their snow conditions are constantly ranked among the best in the Wolverine State by a variety of news outlets.

Treetops, near Gaylord, is bringing back last winter’s Skiable Feast with an even bigger schedule and more food stations. Last season's inaugural event sold out on two occasions.

Crystal Mountain, located about 40 miles southeast of Traverse City, is adding two new slopes: Last Call, a glades run on North Face, and Jester’s Alley, a new dedicated beginners terrain park. A new partnership with Burton Snowboards will be one of only a very few Midwest ski resorts designated as a Burton Learn-to-Ride Center. New features are being added to the Tank Line in Tuck’s Terrain Park and more fat tire biking trails are being offered. Winter will add new elements to the Park at Water’s Edge new adventure course opened this past summer; bridges, swings and ziplines.

Near Detroit Mt. Brighton and Mt. Holly are both making improvements for the coming season.

Brighton is adding a new ticket system to help streamline the process, improving the ski and ride school, and adding several new features in the terrain park that got a huge improvement last year with the infusion of new owner Vail Resorts' dollars. Vail Resorts ambassador Lindsey Vonn is coming to Mt. Brighton this Saturday, Oct. 25, to kick off her Ski Girls Rock program that will be coming to the ski area this winter

Mt. Holly is revamping its terrain parks with Snow White becoming a beginner park and Lower Snowstream is being made into a full rail-yard, top to bottom. Upper Snowstream, weather permitting, is scheduled for some mid-size jumps. Jumps are also being added on Slalom for the first time in years.