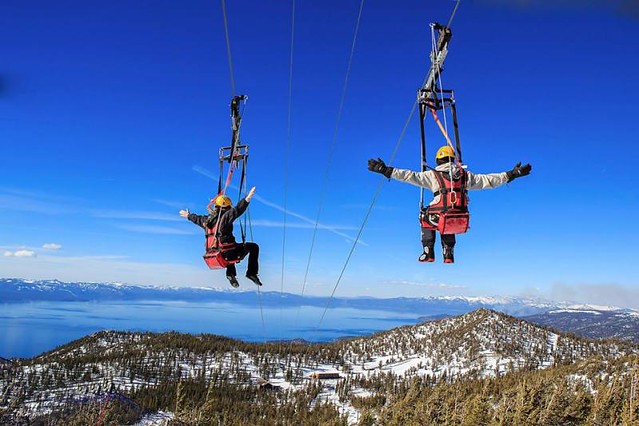 Over the next couple of summers, visitors to Heavenly Valley will find more and more warm-weather things to do as the resort, owned by Vail Resorts, develops its Epic Discovery program.

First up for the Lake Tahoe mountain will be a new four-line zip line, called Hot Shot. Once Heavenly’s full summer menu debuts June 12, thrill-seekers can ride the parallel ziplines alongside the existing 3,300-foot Blue Streak wire ride – one of the longest in the country.

The ziplines are located at the top of the Heavenly Mountain Gondola, which rises out of the main Nevada base area and costs $40 a ride for adults, $20 for youngsters. For now, a zipline ride costs $45.

The entire Epic Discovery plan received U.S. Forest Service approval in 2014 as part of the federal agency’s directive to encourage summertime activities on what have been primarily winter sports areas in the National Forest. Environmental education components are highly encouraged.

“Epic Discovery (at Heavenly) will be rolled out in phases during a couple years at Heavenly, beginning with construction on a few activities near the top of the gondola this summer,” Heavenly’s Sally Gunther told SnoCountry.com. “We’re going to be very thoughtful in how we implement Epic Discovery and be sure we do it the right way. With that in mind, it’s going to take us a few years to see this vision through to completion.”

Plans include zipline and tree canopy tours, alpine coaster, mountain bike park, multi-use trails, ropes courses, and an interpretive and educational tour. Initial work will center in and around the Adventure Park in the Tamarack Lodge area at the top of the gondola. Subsequent facilities will be build in the East Peak and Sky Meadows areas around mid-mountain.

Water quality protection of streams and watersheds within Heavenly’s permit area also are part of the plan. Click here for more information.