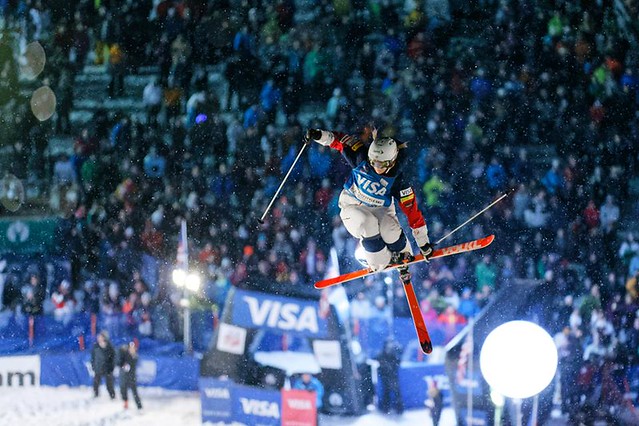 Olympic champion Hannah Kearney from Norwich, Vt. stepped it up another notch, taking gold in dual moguls in a thrilling finals matchup with Canadian Justine Dufour-Lapointe. It was Kearney's eighth career World Championships medal, the most ever of any freestyle skier.

After skiing to a silver medal in the single moguls competition at Kreischberg, Austria, Kearney reviewed her performance and set tactical goals for the duals competition.

“I had it as my goal to win the qualifying runs so I would have my pick of the course,” said Kearney. “It helps you focus because you only have to look at one side of the course. I also went to a helicopter on the bottom air instead of a heli mute grab because it allowed me to ski a little bit faster and have a better landing.”

Coming into Kreischberg, Kearney had not yet captured a World Championships win in the duals competition. She now has that golden snowflake and a new record on her resume.

“It’s really cool. It’s a testament to my strength over a long period of time," said Kearney. "It was ten years ago that I got my first World Championships medal, and to continue to come back and fight and walk away with eight medals—three gold—that’s a nice necklace.”