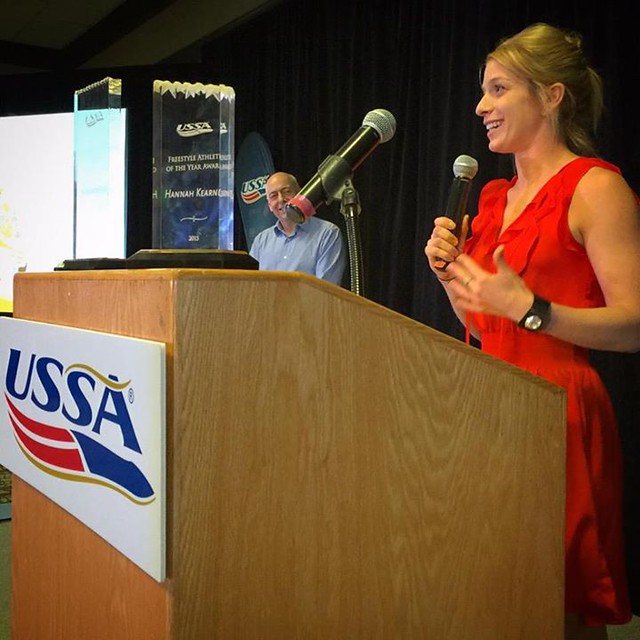 The U.S. Ski and Snowboard Association (USSA) recognized accomplished athletes and leaders at its annual Chairman’s Awards Dinner during USSA Congress. Olympic and World Championship gold medal winning moguls skier Hannah Kearney, from Norwich, Vt, was honored by the USSA with the Beck International Award, which is awarded to the top USSA athlete in international competition.

Kearney, who retired after the 2014-15 season, solidified her position as one of the best moguls skiers in U.S. history, winning a total of 46 World Cups over the course of her career and bringing home both the moguls and overall freestyle titles in her final season.

Among other awards, Allen Church (Albuquerque, NM), one of the world’s most knowledgeable experts in race timing and has been responsible for training thousands of others, received this year’s Julius Blegen Award for over 45 years of service to the USSA.

Park City Nordic Ski Club was named Club of the Year. U.S. Freestyle Ski Team coach Matt Saunders (Park City, UT), who helped lead the aerials team to be Best in the World this season, was named Coach of the Year.

Randall has been a pioneer in her sport while also empowering young women through positive experiences in sports through Fast and Female (add link). She was presented with the Russell Wilder Award for contribution to youth. Corradini, who passed away in March, mentored the young pioneers of women’s ski jumping to follow their dreams of inclusion in the Olympic Winter Games. She received the USSA’s John Clair Award for service to the U.S. Ski Team. Lindsey Vonn was named alpine athlete of the year.

Tweet
Tags:
USSA
PCSkiGal: You CAN Get Your Drink On In Park City
Revenues For Western Lodging Hit All-Time High; Up...