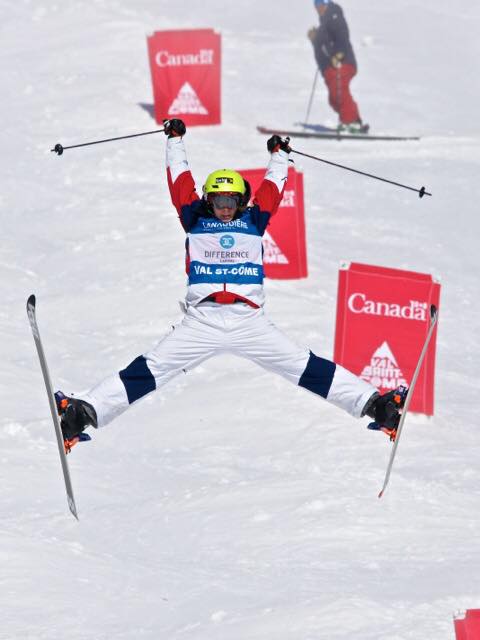 “Getting the record is huge,” said Kearney. “To me, it’s almost perfect. Records are important to me because I think they are a testament to your training and results. Being even in the same category as Donna is huge. I never would have guessed that I would be compared to her.

Coming in to the final World Cup, Kearney had the moguls crystal globe locked down, but the overall globe was still up in the air, with Kearney’s competition racing just a few runs over in Megeve.

“It was a fairytale ending, to win both globes. I was watching the ski cross finishes because they were right next to ours. Anna Holmlund had won the last two days and as a result pulled ahead of me in the overall standings. So today I had to win in order to get that overall title. I was very aware of that. I just knew I had to ski well, so that was what I was focusing on. I just skied straight forward, and my turns really won it for me today.”

"I first met Hannah Kearney at a Spring camp in 2002 at the end of my career - a teenager with school books in tow and the drive to become a great moguls skier," said Weinbrecht Sunday as she headed out onto the slopes at Killington with her family. "I saw her evolve to the point where she took control of the sport pushing the envelope of moguls skiing.

"I was so happy and proud then and am absolutely delighted now, to be sharing the record for World Cup wins with such an accomplished athlete. Well done, Hannah! What a fantastic time for U.S. freestyle skiing"

Kearney kept her focus throughout the day. She had a bye in the round of 32, then faced teammate Mikaela Matthews (Vail, CO) in the round of 16. She advanced to the quarterfinals where faced another teammate, K.C. Oakley (Piedmont, CA). She earned her spot into the finals with a win over Canada’s Andi Naude. Her toughest matchup came in the final run of the day, facing Olympic silver medalist Chloe Dufour-Lapointe.

With the 2015 World Cup tour in the books, the U.S. team will compete at the U.S. Freestyle Championships in Steamboat Springs, CO before officially closing out the season.