One of Taos Ski Valley founder Ernie Blake’s goals was to bring the high alpine slopes of the Sangre de Cristo Mountains within reach of all the visitors to his New Mexico ski resort. That dream has now become a reality with the opening of the Kachina Peak Lift Friday.

The face of Kachina Peak has received enough snowfall and has been sufficiently skied in by patrol and hikers to finally open the much-touted chairlift.

“It is with great excitement and pride that I share that the Kachina Peak chairlift will open to visitors (Feb. 13),” said CEO Gordon Briner. “Now, many of our guests will get to experience the incomparable Kachina Peak terrain for the first time.”

The 1,100-foot triple chair will deliver skiers and snowboarders to the above-treeline world that Blake, a native of the European Alps, treasured when he decided up on the La Cal Basin for his new ski area in the mid-1950s.

“It was Ernie Blake’s vision to establish a ski area that was as spectacular as the resorts he knew in Europe with above treeline, wide open terrain and fantastic views,” Jean Mayer, owner and operator of the Hotel St. Bernard and technical director of the Ernie Blake Ski School, told SnoCountry.com.

For the first time the resort’s 58 years, skiers and snowboarders will be able to reach the mountain’s 12,481-foot high point without having to make a 45-minute hike. The new 1,100-foot, fixed-grip triple chair will take off east of Lift 4 and provide a five-minute ride to about 80 feet below the summit. From there, the expert terrain on wide-open Main Street, the gnarly K Chutes and the narrow gullies above Hunziker Bowl await.

The $3 million chairlift was the first major project since the founding Blake family sold the resort to billionaire conservationist Louis Bacon at the start of last season. The idea of a lift up Kachina Basin has been kicked around for years at the Northern New Mexico resort, but the Blakes didn’t have enough money to build it. With Bacon’s backing, the $3 million lift went up this summer.

Briner said the resort will announce normal operating hours for the lift soon, noting that as with all high-alpine chair lifts, the lift may close periodically depending on snow and weather conditions.

There’s still hiking at Taos Ski Valley – a bone of contention for inveterate locals who felt hiking “the peak” was a badge of honor and somewhat of an exclusive right they shared with other hikers. In-bounds terrain without lift access will be roped off in Juarez Bowl and Highline Ridge, and the West Basin. 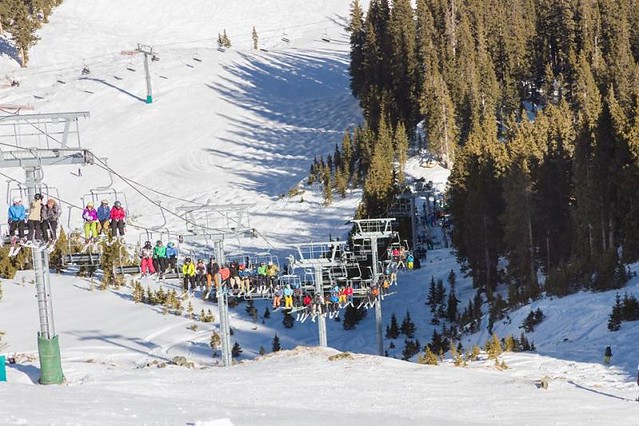