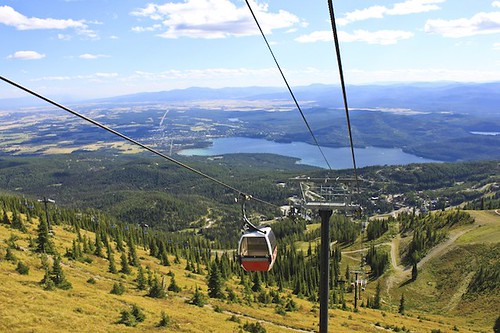 The Flower Point Project, begun several years ago at Montana’s Whitefish Mountain Resort, is wrapping up this summer with the installation of a triple chairlift that will be ready for the winter season.

Skiers and snowboarders can look forward to an additional 200-aces of lift-served terrain including new runs and glades that are being opened up with the addition of the new lift.

“It’s going to make Big Mountain that much bigger,” she said. “And, being north-facing slopes, the new terrain will provide more dependable conditions earlier and later in the season.”

An additional half-million dollars was spent this summer to expand the food court area providing more options for guests, including adding 100 more seats in the 1,200-foot addition added to the base lodge last summer. New food stations will create more options and faster service for customers.

The resort’s new Kashmir Trail, opened last summer for mountain biking, was recently named a model “Flow Trail” by the International Mountain Biking Association (IMBA). It was one of four Flow Trails recognized from around the world. Other trails receiving the honor were located in Austria, the Czech Republic and Sun Valley.

Whitefish Mountain Resort is slated to open for the season Dec. 6, and adult season passes, currently on sale through the end of the month, are $610. They will be going up by over $300 on Oct. 1.