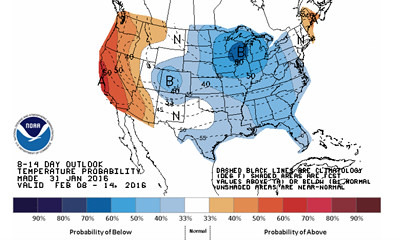 For the first part of winter, Western mountains have received abundant snowfall, while areas in the Midwest and Northeast have seen warm temperatures and little snowfall.

Well, that’s about to change.

“The pattern will change late this week and over the weekend,” noted OpenSnow.com meteorologist Joel Gratz in his latest blog in which colder air will stay near and east of the continental divide through mid February. “This will likely mean better snow conditions for New England, and perhaps less frequent storms for the West Coast and western Rockies.”

For the past few days, more than three feet of snow has fallen in parts of the Northwest, California, Colorado, Utah and Arizona. While the Northeast saw temperatures soar into the upper 40s and low 50s.

Heading into the first week and weekend of February, sunshine will slowly return to the west, while snowmaking cranks back up in the Midwest and Northeast as resorts look to refresh trails that are currently open, and work on expanding terrain heading into the busy February winter break weeks. But it will be a slow transition.

“The heaviest snow during the next few days should fall in Colorado and then track northeast through the Great Lakes,” Gratz said. “Later in the week, a new storm will bring snow to the Pacific Northwest and the northern and central Rocky Mountains.”

For more details on the weather, check out the OpenSnow.com regional forecasts by their team of meteorologists. And of course check out the daily new snow totals to find out where the fresh snow has fallen.