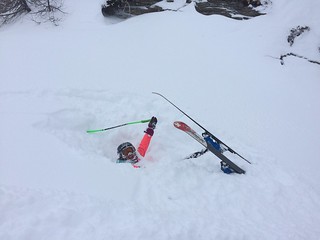 After more than 50cm of snow over the past two days, Sunday’s Audi FIS Ski World Cup downhill, which was already rescheduled from Saturday, was cancelled due to unsafe snow conditions.

“The new snow just rotted the snow underneath and created an unstable, bally, hole-filled surface,” said Laurenne Ross (Bend, OR). “So it wasn’t safe for us to race on.”

So what is a racer to do when the race is cancelled? Bust out the powder skis of course!

“Face shots are the most rewarding thing in the world, other than coming through the finish of a sick downhill!” Ross said, as a few cheers erupted from her teammates in the background. “It was so nice to get to ski powder for a couple of days in a row, because we haven’t been able to do that all year. So, I finally got to use my new powder skis and slash some turns. So it was still a lovely week.”

“I think the powder skiing is a compensation for missing the races, so I’m happy with that,” added Alice McKennis (Glenwood Springs, CO).

The women’s speed team moves on to La Thuile, Italy for downhill and super G races Feb. 20-21. Ross hopes to carry her momentum from last week’s fifth-place downhill finish in Garmisch, Germany to the Italian Alps.

“I’m bummed that it was cancelled because I feel that I could be really fast on this hill, which I proved in the second training run,” said Ross, who finished third in Friday’s second downhill training run in Crans-Montana. “But, I’m going to take that into La Thuile, and take my momentum from Garmisch and try to send it there.”

Up next though, Mikaela Shiffrin (Eagle-Vail, CO) returns to World Cup racing in Monday’s slalom in Crans-Montana (4:00 a.m. and 7:00 a.m. EST), which was re-scheduled from Maribor, Slovenia.