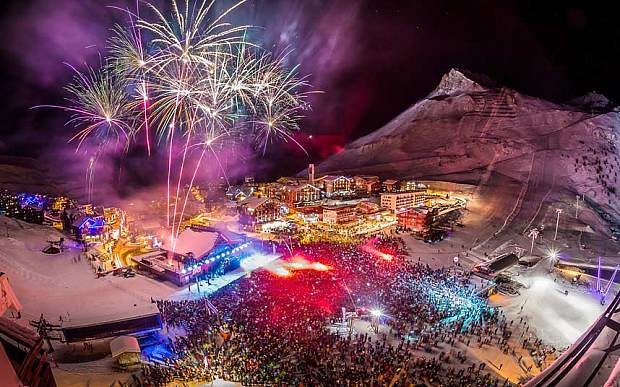 Skiing in Europe over the holidays? The Daily Telegraph newspaper has some picks for a memorable New Year’s eve.

Let’s start ringing in the new year in France. Courchevel in the Trois Vallées has a four-day New Year festival starting Dec. 28 with a number of shows combining theatre, music and dance, as well as an ice skating show  Dec. 29. New Year's Eve find’s a party at the bottom of the slopes with music from DJ Stef and fireworks.

Val Thorens hosts Val Tho Crazy Night where events include a live concert, a torchlight descent by ESF instructors, a ski and snowboard freestyle show, children's entertainment and fireworks at midnight.

Want to party in Austria? Always lively Kitzbühel provides another New Year highlight. Thousands of spectators will gather in the village centre on New Year's Day for a firework display followed by instructors from the Red Devils, Element3 and Alpine Experts ski schools performing a torchlight procession before a jump over a fire pit, all to a traditional Tirolean soundtrack. The event starts at 4:30 p.m. and is free.

Revelers In Ischgl can follow an Austrian tradition by welcoming in the New Year with the Danube Waltz after the live broadcast of the pealing of Vienna's Pummerin bell at midnight. At precisely 12.06 p.m., fireworks will be lit at five different sites around the resort accompanied by live music.

For a hip hop fix, head to Switzerland’s Davos for the fifth annual Big Bash Davos, where Swiss and international stars keep you entertained with turntables, confetti guns and stage shows, from 10 p.m. New Year's Eve. Linked Klosters, meanwhile, has a peculiar New Year's Day tradition of pig racing, where 10 piglets compete to bring good luck into the New Year.

Merano, Italy, transforms a piazza into an ice rink and Christmas market, open from 10 a.m.  New Year's Eve – there's live music and entertainment for the whole family throughout the day. In Merano 2000, the slopes are open and illuminated till 2 a.m., with the cable car running till 1.30 a.m.

May you and your family enjoy a Happy New year wherever you may be.