El Niño To Be Nice In West, Naughty In Northeast For Christmas 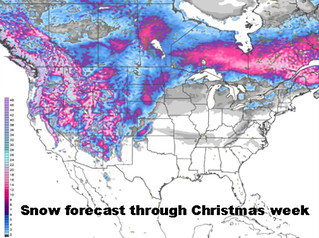 Ski resorts throughout the Northeast are wondering just what did they do to get onto the naughty list? Was it all that snow last season? The cold temperatures too? Maybe we should just blame it on El Niño?

There’s no doubt that this winter’s powerful El Niño has been influencing weather across the globe the past several months. El Nino usually leads to a milder than average winter with less snow than average throughout the Northeast, and above average precipitation across the West.

Typical places where it snows, snows and snows more, have yet to see a flake fall this season. Buffalo, New York, known for winters that arrive early and stay late, broke a century old snowfall record Friday - for a lack of snow. The last time Buffalo made it this late in the season without measurable snowfall - defined by the National Weather Service as at least 0.10 inches - was 1899. Burlington, Vermont, could follow. Its current record for having no more than an inch of snow is Dec. 21, set in 1948.

It’s a good bet that Burlington will break the record, as the strong El Niño continues, and long-range forecasts into Christmas week show signs that the current weather patterns will continue.

“While we should not trust the details of a 10-day forecast, the trend is clear: Most of the snow will be in the west, with little snow and continued warm air in the east.,” noted OpenSnow.com meteorologist Joel Gratz on the 10-day forecast into Christmas eve in his latest blog.

There is some good news for the Northeast as temperatures will slowly fall into Christmas week, allowing many resorts to resume snowmaking to re-surface the limited open terrain currently available, and possible expand terrain offerings into the busy Christmas week.

So, if you’re dreaming of a white, powdery-filled Christmas, most every resort from British Columbia, Alberta, the Pacific Northwest, California, Utah, Colorado and New Mexico has it.

“This week, northwest flow will deliver the goods to the Pacific Northwest and interior Rockies,” Gratz said. “Then a slow moving storm (or series of storms) will bring snow to California and the four corners region late in the weekend and during the week of Christmas.”