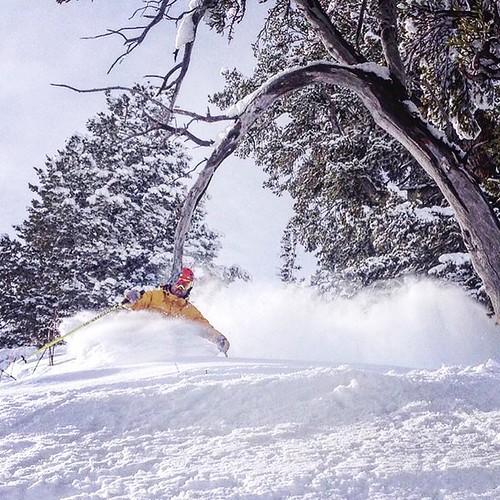 The storms have been rolling over the ridge and into the Wheeler Basin above Ogden, and the conditions at Snowbasin Resort are as good as they’ve been in years – just like they were imagined to be in the old days.

History and tradition remain a big part of Snowbasin, which has been tucked into the northern reaches of the Wasatch Range since 1940. One of the oldest big-mountain ski areas in the West, Snowbasin enters its diamond anniversary season without much fanfare – typical of this sprawling skier’s mountain a bit off the beaten track.

The resort will officially celebrate its 75th birthday Jan. 30, with birthday cakes, music, fireworks and a parade. Earlier this year, the city of Ogden proclaimed Snowbasin’s birthday on Nov. 27 – the same day that, three quarters of a century ago, the city officially opened Ogden Snow Basin Winter Playground.

Over the summer, the Holding family that has owned Snowbasin since 1984 (as well as Sun Valley) sunk money into remodeling base lodges and building an 11 million gallon reservoir to ensure early-season snowmaking.

Luckily, the resort hasn’t had to rely upon the snow guns much this season. More than 130 inches have fallen, settling into a 60-plus inch base with all 3,000 acres and 104 trails good to go.

Snowbasin has deep roots in some of the earliest conservation and watershed protection efforts in Utah. In 1923, a devastating flood washed out of the mountains and foothills and heavily damaged the city of Ogden. Decades of deforestation from mining and grazing had stripped the northern Utah hills of their ability to absorb the sudden rainfall.

Recognizing that, the local citizenry bought some 5,000 acres in the Wheeler Basin and transferred stewardship to the U.S. Forest Service. The first rope tow went up in 1939, and Ogden Snow Basin Winter Playground officially opened in November 1940 to coincide with the Winter Carnival at Weber College in Ogden.

In 2002, Snowbasin hosted the Olympic downhill, super-G and combined events as the best speed hill in Utah. It also is a top stop for professional free skiing tours.

Photos: Top -- Snowbasin skiers and riders are enjoying the plentiful snows this winter (Snow Basin/Facebook); Below -- The resort above Ogden, Utah is celebrating 75 years (Snowbasin/Facebook)