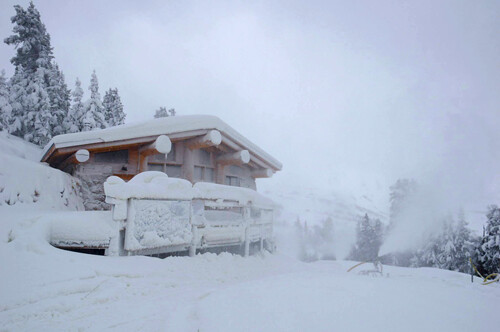 Loveland Ski Area opens for the season Thursday, winning the race to be the first Colorado Resort to welcome skiers and snowboarders for the 2015-16 season.

Historically, Loveland and Arapahoe Basin have battled it out to be the first resort in North America to open for the season. However, Vermont’s Killington resort took top honors, opening Sunday, October 18. Maine’s Sunday River and Mont Saint-Sauveur in Quebec followed on Monday, October 19. But mild temperatures have forced all three Northeast resorts to suspend operations until snowmaking conditions return, which according to the latest forecasts, may not arrive until the second week of November.

“Good job Loveland for announcing a Thursday opening,” Arapahoe Basin COO Alan Henceroth wrote on the Arapahoe Basin Blog. “About mid-day I drove over there and visited with a few friends. The place looked good. They had some snow pushed out and are gearing up for a nice opening.”

Snowmaking continues at Arapahoe Basin and an opening date will be announced in the coming days. Both Loveland and Arapahoe Basin received more than a foot and a half of snow last week, in addition to colder temperatures to finally start to make snow.

“(Snowmakers) have done an incredible job getting the mountain ready for the first skiers and riders of the season,” Loveland Director of Business Operations Rob Goodell told the Vail Daily. “The warm fall weather delayed the start of snowmaking this year, but Mother Nature finally came through.”