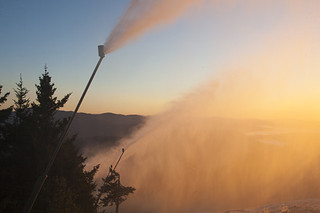 The temperature bottomed out at 29-degrees Friday morning (Sept. 19) at Sunday River Resort in Maine, so they did what most ski areas usually do when it gets cold - turn on the snowmaking system.

Thanks to unseasonably chilly air (about 15 degrees colder than normal) Sunday River was able to complete a full test of its snowmaking system this morning, firing up 32 snow guns on the T2 trail.

This summer, Sunday River has used part of its $5 million capital investment package from parent company Boyne Resorts and combined it with an Efficiency Maine grant to add 172 new, energy-efficient snowguns this season.

“Snowmaking is a priority at Sunday River,” says Resort President and General Manager Dana Bullen. “We test our system at the first opportunity we have so that we know we’ll be ready to start making snow full-time and open for skiing and snowboarding as soon as the weather allows. Our season passholders and guests expect it from us, and we always aim to deliver.”

Last year, Sunday River wasn’t able to test its snowmaking system until the second week of October, so this is a major coup. Though the resort has not yet set an opening date, this test does give Sunday River’s legendary snowmakers the okay to crank the system at full capacity once the temperature is consistently cool enough. Typically, snowmaking requires sustained temperatures between 26–30 degrees overnight.

If all of this talk of snow has you looking forward to winter getaways (as it well should), remember to take advantage of Sunday River’s Lowest Price Guarantee on all lodging packages, as long as they’re booked by October 15, 2014. You can also purchase a 2014-15 New England Pass before October 13, 2014 to save and ski all season long at Sunday River, Sugarloaf, and Loon Mountain.